Well we had the last of the Flights today to decide the top eight boats to advance to Quarter Finals. Pressure was on both Juliet Costanzo and Niall Powers teams to get a couple more wins under their belt to advance. Nial Powers did just that but after being penalised 0.5 points on Day 1 for damage sustained to a boat cost them after winning four races.

Juliet Costanzo had trouble getting off the line today but finished in 9th position and Niall close behind one tenth.

The competition was very formidable and our RPAYC teams can hold their heads high putting it to a lot of the top ranked teams. The top teams just were more refined in all their manoeuvres and just a bit better in their boat handling and boat control. It was is a pleasure to be able to support this fine group of sailors. They are well respected by their peers and they all have had an amazing time and experience here in NZ.

I would like to acknowledge the other members of the teams. Jemma Hodgson Emma Rankin Antony Hawke Alistair Read Cam Whiteside Tom Quarry Ruby Scholten and Jasmine Bridge.

We would like to thank the Royal Nicholson Yacht Club in Wellington and RNZYS in Auckland for being fantastic hosts for both regattas.

A beautiful day in Wellington today after travelling from Sydney yesterday. The team including Cameron Whiteside Alistair Read, Jemma Hodgson and Jasmine Bridge have all been warmly welcomed here in Wellington.

Today we have a practice session in the Elliot 6’s but before that we took in the sights of Wellington and we checked out the amazing Museum of New Zealand Te Papa Tongarewa which has a number of themes including the geographic and natural transformation of this country, Maori Culture, World War 1 -Gallopoli, NZ Art and a lot more. 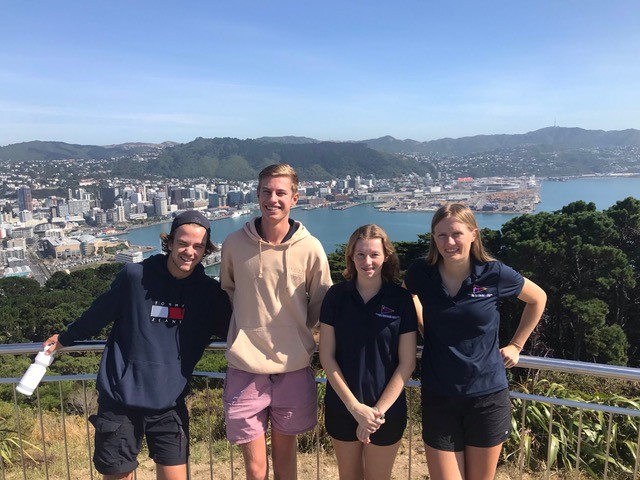 We are staying with Belinda and Glenn Stanley, in a rather unique architecturally designed residence at Karaka Bays, about 15minute drive from the Royal Port Nicholson Yacht Club in central Wellington. It is always a great expereince to be billeted with Club members ad always greatly appreciated.

The racing starts tomorrow with 5 teams competing. 4 Round robins then Semis and Finals on the final day on Sunday. Team spirit is high and all looking forward to the upcoming racing.

Heres full set of results for the Centreport International Youth Match Racing Championship for 2020, congratulations to,

Thanks to all of the teams that travelled to Wellington and many thanks to Centerport Wellington for your valued sponsorship!

Congratulations to Scott who has been announced as one of the 32 current and former serving ADF members to the 2020 Invictus Games.

Invictus Games The Hague 2020 will be held from 9-16 May, 2020. This will be the fifth time the international games have been staged since their inception in 2014. The Australian Defence Force (ADF), Returned and Services League (RSL) and Veteran Sport Australia (VSA) will partner to send a combined team of 32 current and former serving ADF members to the Games.

The Invictus Games are an international adaptive sport competition for serving and former military personnel who have been wounded, injured or become ill during their military service.
The Invictus Games use the power of sport to motivate recovery, support rehabilitation and generate a wider understanding of the sacrifices made by the men and women who have served their country.
The Games recognise the significant contribution made by family and friends in the recovery process.
This time around Scott will be competing in Athletics, cycling, indoor rowing, wheelchair rugby and swimming.

Scott has been a part of the club for many years now, starting with our soldier on program as a participant and more recently gaining his qualification as a Keelboat Instructor and now teaching and assisting others to learn to sail and enjoy our amazing sport as well.

Congratulations to Micheal & Lachlan Ritchie, Revolver for taking out the inaugural Ensign Yachts ‘Country of Origin’ Estuary Series in the PITTWATER Regatta this weekend. A wonderful weekend was had by all even with the light winds on Pittwater. 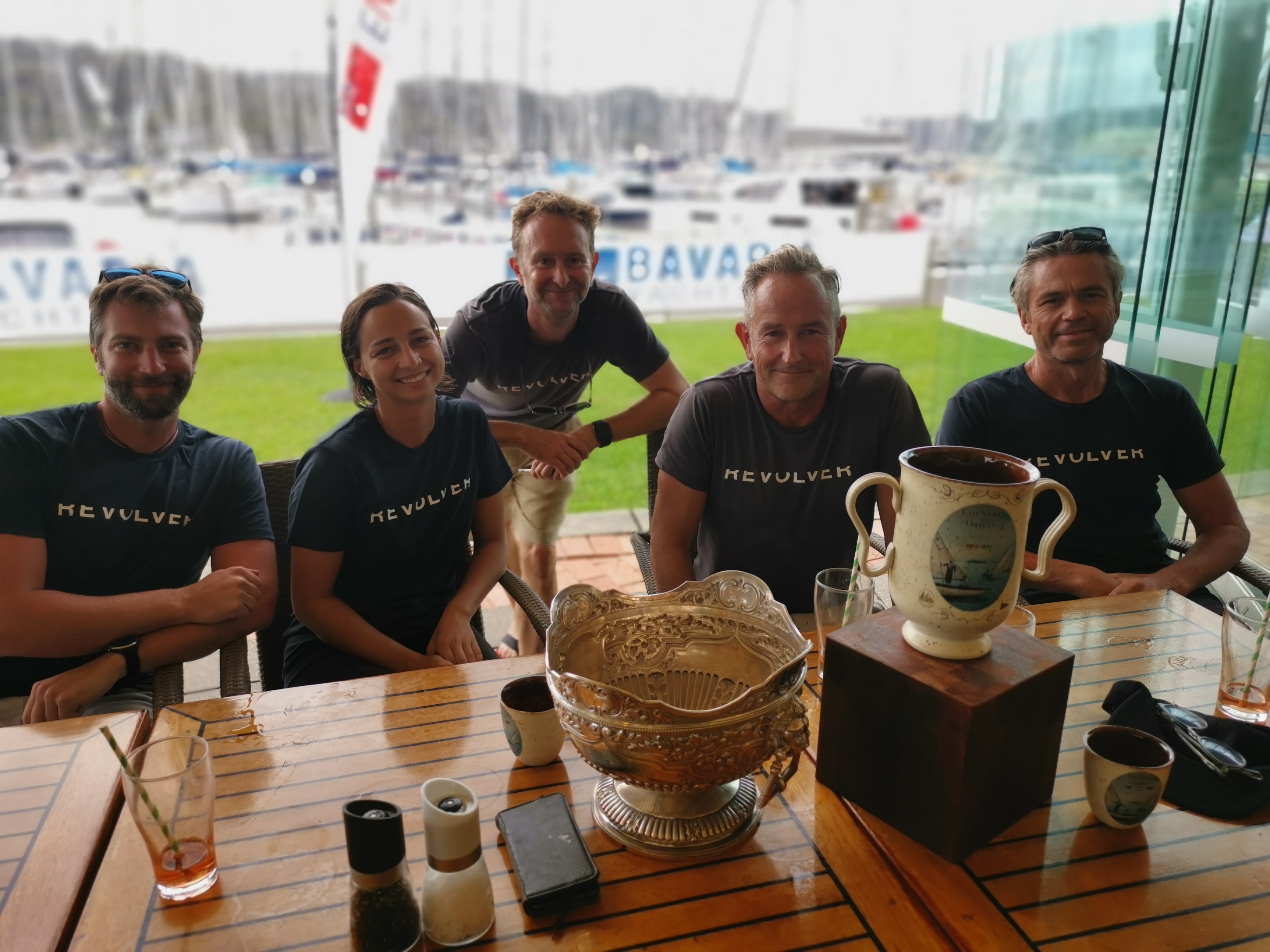 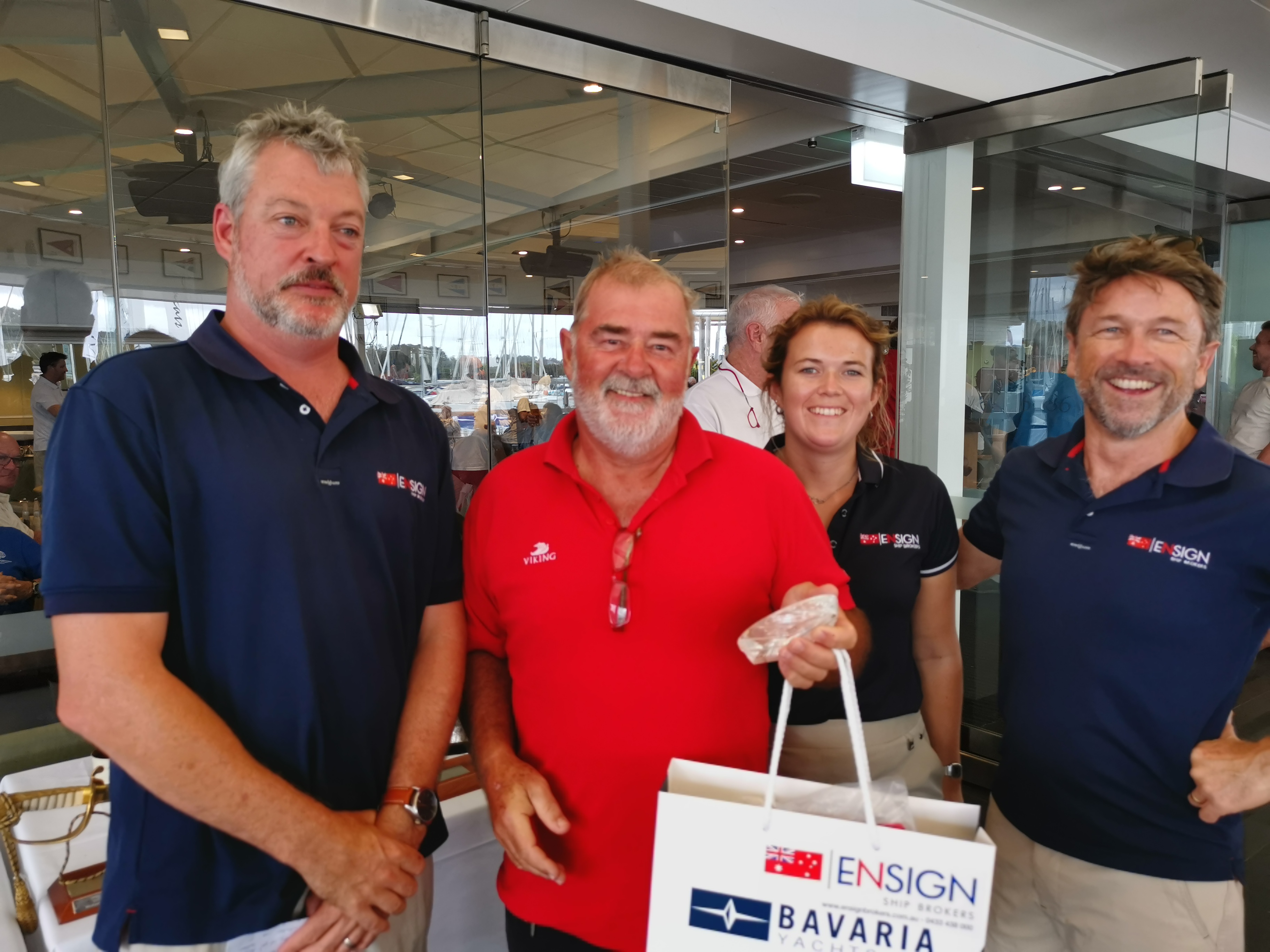 Great fun was had back at the RPAYC after the two days of racing, with the Aston Martini's Crew Party on Saturday afternoon entertaining crews well into the night. Sunday saw much better condtions inshore and offshore with a full house back at the Club for the presentation of the weekends 9 divisions race results. A must do annual event! Get your teams together for February next year!

Thanks to all the competitors sailing yachts from all over the world including  Australia, France, Turkey, USA and Germany. A special thanks to the RPAYC for hosting with additional  support from the RMYC helping out on course. Special thanks to our generous sponsors Helly Hansen, North Sails, Club Marine, Ruel Rigging, Vacuwash and Kreyfarer Ceramics for the wonderful prizes. More info and photos of the event  to come …. If you would like your own boat immortalized on Kreyfarer ceramics highly acclaimed jugs or ornamental ceramics, don’t hesitate to get in touch with Ensign Yachts to make it happen. You can see the Perpetual trophy on display at the club. View the weekends full results here... 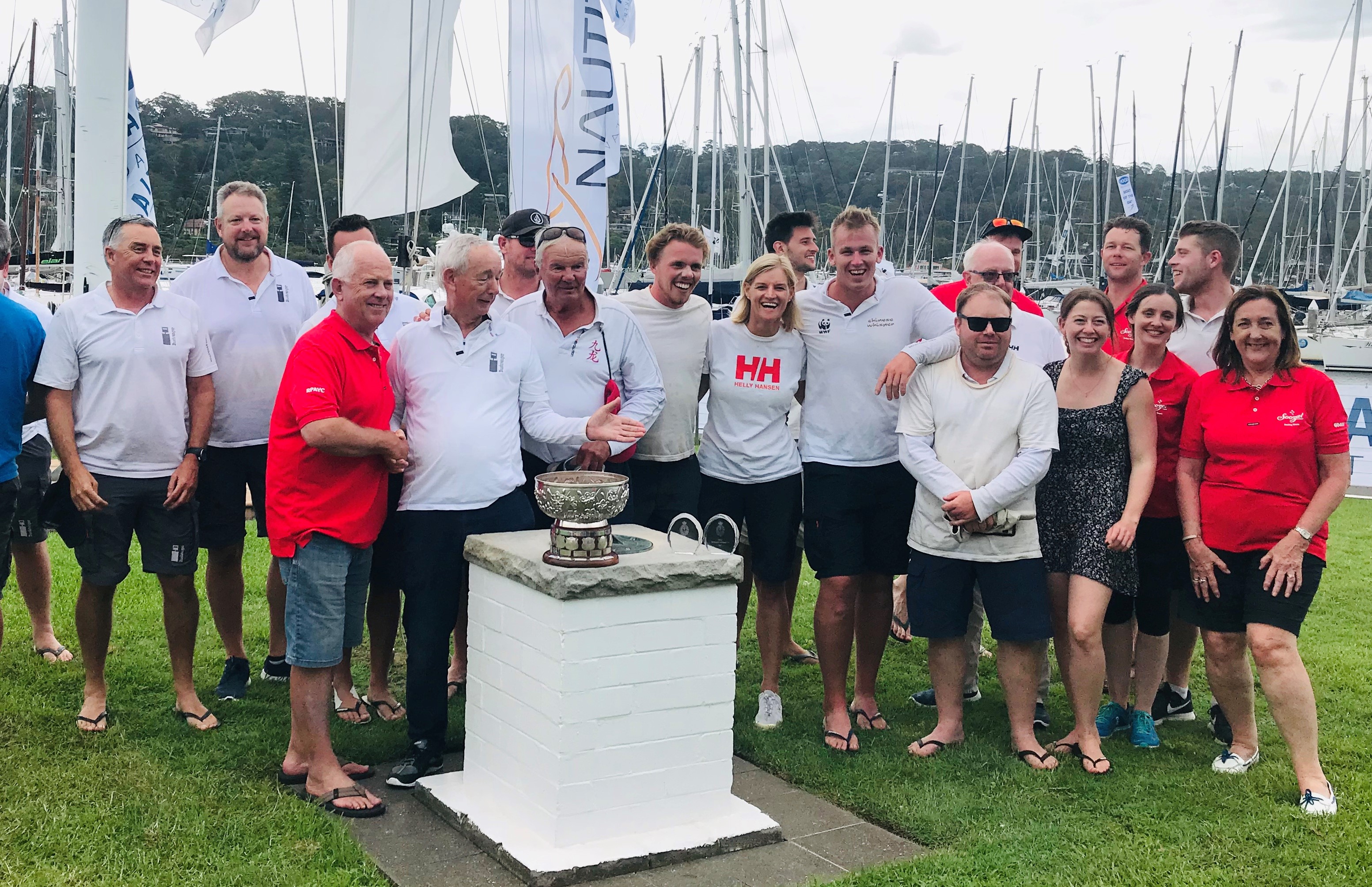 If you are interested in the photos taken on the day please reach out. We hope to build in a team event into the series next year with boats of the same country of origin fighting it out against rivals. Stay tuned for developments.

The two finished third at the 2018 Australians and led the 2019 Championship, but let Outlaw slip through the net and ultimately finished second. No such mistake this time, they stayed focussed and resilient throughout, despite a couple of breakages and some very close finishes, with only seconds separating the top three at times.
Conspiracy defeated nearest rival, Middle Harbour Yacht Club’s Advanced Philosophy (Peter Sorensen), by an 11-point margin. Third placed Richard Williams (Calibre, CYCA) was a further six points down the leaderboard at the end of the nine-race no-drop Championship.
Sorensen won Race 6, while Williams took out Races 1 and 4 and Greg and Wade Croak’s Challenge (Royal Motor Yacht Club Toronto) Race 7 to finish fourth on countback to Calibre. However, none could put a dent in Conspiracy’s performance.
Back at the RPAYC after racing, Byford and Hudson shared their thoughts on finally claiming the title that had escaped them in the past.
“You never really think you’ve got it in the bag. We had a block break on the jib halyard in Race 8, but the crew fixed it and we finished third,” Byford said.
Hudson commented: “We worked very hard for the win and we were consistent on the starts and had consistent boat speed.”
Byford added: “And good tactics helped us. It’s a relief to finally win.”
Hudson: “After Day 1 we were on the right track, but we had two more days of racing – you can blink and you are out the back door easily.”

Fast across the Tasman... twice

Two dramatic and tantalising new ocean (and we mean ‘ocean’) race courses are being shoe-horned into a busy America’s Cup summerWith the 36th America’s Cup as the centrepiece, the summer...

America’s Cup is heading to the RPAYC

The Royal Prince Alfred Yacht Club (RPAYC) is pleased to announce the famous ‘Auld Mug’, the America’s Cup, is headed across the Tasman Sea to the Club in March for...

The Royal Prince Alfred Yacht Club (RPAYC) in Sydney and the Royal New Zealand Yacht Squadron (RNZYS) in Auckland, have named Australia’s most famous sailor, James ‘Jimmy’ Spithill and one...

Sydney to Auckland Ocean Race 2021Media Release – 26 July 2019   The Royal Prince Alfred Yacht Club and Royal New Zealand Yacht Squadron are excited to announce that the Notice of Race for the...

Do ALL your Sails meet the new Rules? - Changes to Sail Number Rules

At the 2019 World Sailing meetings their Racing Rules Committee approved changes to the rules relating to sail numbers. The changes introduce a requirement that numbers be of a contrasting...

Dear Members,With further restrictions that have been announced this week we would like to remind you that we are here to help.Last week we sent boat owners a message offering...

The Club would like to extend a warm welcome to SWS Pacific who have recently taken up a tenancy at the Club. The office is situated on the first floor (upper...

Available for collection Monday - Sunday: 09:00 - 16:00In an effort to assist our members we launched a new service at the Club during the week. Our NEW Alfred's Grab...

Special Member OfferPurchase the latest copy of Sails Magazine, Australasia's only print and digital yachting magazine and Ocean Media will donate $2 back to the RPAYC, supporting our Youth Competition Support...

Dear Members,A great deal has happened over the past week and like you, the Royal Prince Alfred Yacht Club has had to adapt to the ever-increasing demands and changes.As you...

We are excited to launch 'Alfred's Grab & Go', which is now open! Available for collection  Monday - Sunday: 10:00 - 16:00THE DETAILSDrive or walk via the ring roadPark adjacent A Arm, short...

Closure of the RPAYC Clubhouse

23 March 2020  IMPORTANT ANNOUNCEMENT Closure of the RPAYC Clubhouse  You may have heard by now, the Government has instructed all Registered Clubs to close indefinitely from midday today, 23 March 2020. Accordingly, the...