Welcome to the Alfreds 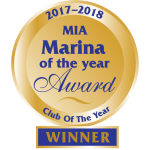 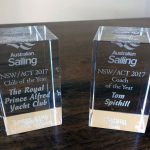 Winner Club of the Year, NSW/ACT for outstanding performance and service to the sport of sailing.

Winner Club of the Year, NSW/ACT 2017 for outstanding performance and service to the sport of sailing. Included was Tom Spithill winning the Coach of the Year Award.

Australian Yachtman of the Year

2008: Dan Fitzgibbon, sailor with a disability

2009: Dan Fitzgibbon, sailor with a disability

2011: Dan Fitzgibbon and Liesl Tesch, Sailors with a Disability

1971: Peter Hemery, member of crew on board Ragamuffin, winner of 1971 Fastnet Race.

Congratulations and thank you to Bronwyn for becoming our 5th Patron. She continues our history of distinguished Patrons and I am sure she will be an outstanding contributor to our Club.

I have been tasked to provide you with a summary of our Club’s history and achievements over the 147 years of our history. As you will hear, our members have achieved outstanding successes in National and International events, the Olympics and the America’s Cup over the years.

The first race conducted by the Club was on the 7th march 1868. The Chairman of the inaugural meeting of the Club owned the yacht, Dora which was a competitor in that race.

The first interstate event that a club yacht competed in was the Victorian Yacht Club Regatta in 1883. The then Commodore Dr F Milford took his yacht Doris to Victoria and won the regatta.

In the early 1900’s interstate competition was evolving and the RPAYC was having its early successes.

The Sayonara Cup originated in 1904 as an Interstate challenge between Victoria and NSW it was considered in its day one of the most important yachting trophies in Australia. It was won by club Commodore Walter Marks in Culwulla 3 in 1910 and Club member Bill Northam in 1955 in Saskia.

The Northcote Cup was donated by Lord Northcote, Governor of the Commonwealth, in 1907 for competition between clubs throughout Australia. It was first won by Walter Marks sailing Rawhiti, in 1913 the cup was subsequently won a further four times by Club yachts.

The Forster Cup was first raced on Sydney Harbour In 1922 in the 21ft restricted class and was won by Gumleaf owned by a Club member. In its heyday the Forster Cup received as much publicity as the America’s Cup does today.

Club members built on these early achievements over the years. However before I talk about these I think it’s important to recognise that our Club’s success isn’t just about the racing.

We have been fortunate to have committed and dedicated volunteers who have worked hard to create the Club we have today. Significant decisions such as the relocation to Green Point and the construction of the wonderful facilities we enjoy today are a credit to all the volunteers over the life of the Club. The efforts of these volunteers have contributed to the successes of our volunteers. Other examples are the establishment of the Youth Training Program and the Integrated Disabled sailing about which you will hear more later.

Our Club isn’t just about Yacht racing, we have an active cruising division which in recent years organised some very successful adventures off the East Coast, such as the Coral Coast Cruise.

Cruising has always been part of our Club and Sirius owned by Harold Nossiter was the first Australian yacht, and Sydney built, to circumnavigate the world in 1936 -1937. The burgee from Sirius is still proudly displayed in the Clubhouse.

In 1967 Harold Vaughan, cruising a YW Diamond from Sydney to Melbourne to compete in the Australian Championships and later to Brisbane.

In 1987-1988 Kay Cottee was the first Woman to sail non-stop and unassisted around the world in First Lady.

The RPAYC has always been strong in providing support for racing with many of our volunteers becoming State, National and International Umpires, Jurors and Race Officers. Our Club had a significant involvement in support for the Sydney 2000 Olympics. Without these volunteers we would not be racing.

The Club has had a significant representation in the Olympics. We have had 35 members in the Olympic teams, winning seven Gold Medals, two Silver and one Bronze.

Sir William Northam won an Olympic Gold Medal at the 1964 Tokyo Olympics in the 5.5 metre class with crew Peter O’Donnell. He was aged 64 and is the oldest yachting Gold Medallist.

In 1972, David Forbes and John Anderson won a gold medal at the Kiel Olympics in the Star class.

In 2012 Dan Fitzgibbon and Leisl Tesch won Gold in the Skud 18 class.

Colin Beashel has represented Australia at the Olympics six times in the Star class winning Bronze in 1996. Colin was the Australian Flag bearer at the opening ceremony in 2004.

The America’s Cup is another event where our members have achieved outstanding results.

The Club’s first involvement with the America’s cup was in 1913 when Commodore Walter Marks was invited to sail on Shamrock 4 in her quest for the cup. History records that he was not on the winning boat.

In 1983 the longest winning streak in sporting history was ended when Australia 2 won the Cup. Six members of the team were members of our Club.

Over the years we have had 29 representatives in America’s Cup teams, five of them winners.

In addition to the Australia 2 team we have members in the winning Alinghi team in 2003 and 2007. And of course James Spithill as winning helmsman on Oracle in 2010 and the spectacular 2013 win. It is worth noting that James is a graduate of our Youth Development program.

In other events our club members have won 62 world championships and 2013 Australian Championships. These are outstanding numbers and time doesn’t permit mentioning all of them but I will highlight some.

Offshore racing is another area where RPAYC members have excelled. The Wild Oats team have been outstanding in the Sydney to Hobart Yacht Race.

In 2003 Bob Oatley with Wild Oats and Colin O’Neil in Aftershock won the Admiral’s Cup.

Alfred’s boats have won all of the offshore East Coast races over the years. We have had winners of Hamilton Island race week such as multiple winner Marcus Blackmore with his Hooligan team and Ray Roberts with Evolution Racing.

This is just a snapshot of our Club’s achievements and history.

We are currently working on an update to the Club history written by Graham Norman which covers the period from 1867 to 1987. The next volume will cover from 1987 to 2016. This will be available in late 2016 together with an electronic version of Graham’s book.

Congratulations again to Bronwyn and Thank you.