At the International 5.5 Metre Class Cups events in Newport, Australia, preceding next week’s world championship, Ku-Ring-Gai (AUS62, John Bacon, Terry Wetton, James Mayjor) continue to run away with the Hanko Evolution Cup, while Carabella (ITA 73, Alfredo Delli, Gianluca Marolli, Claudio Mazzanti) has taken over the lead of the Royal Kaag Classic Cup. The Alfred’s Gold Cup also started on Monday, with Ali Baba (BAH 23, Craig Symonette, Flavio Marrazi, Will Alloway) winning both races. After the Scandinavian Gold Cup concluded on Sunday, these three events are great warm up regattas ahead of the World Championship, which begins on Thursday. While the Hanko Evolution Cup and the Royal Kaag Classic Cup are highly sought after Class Cups, the Royal Prince Prince Alfred International 5.5 Metre World Championship Jug has been deeded to the class this year by the Royal Prince Alfred Yacht Club and is being raced for for the first time.

On Monday, the conditions on the Palm Beach Circle were in complete contrast to the past two days with light onshore winds, a very bumpy and confused sea and low grey cloud. The day even started and ended with a thunderstorm with some very light rain, enough to bring a coating of wet ash in the morning, but not really as much as is desperately needed. 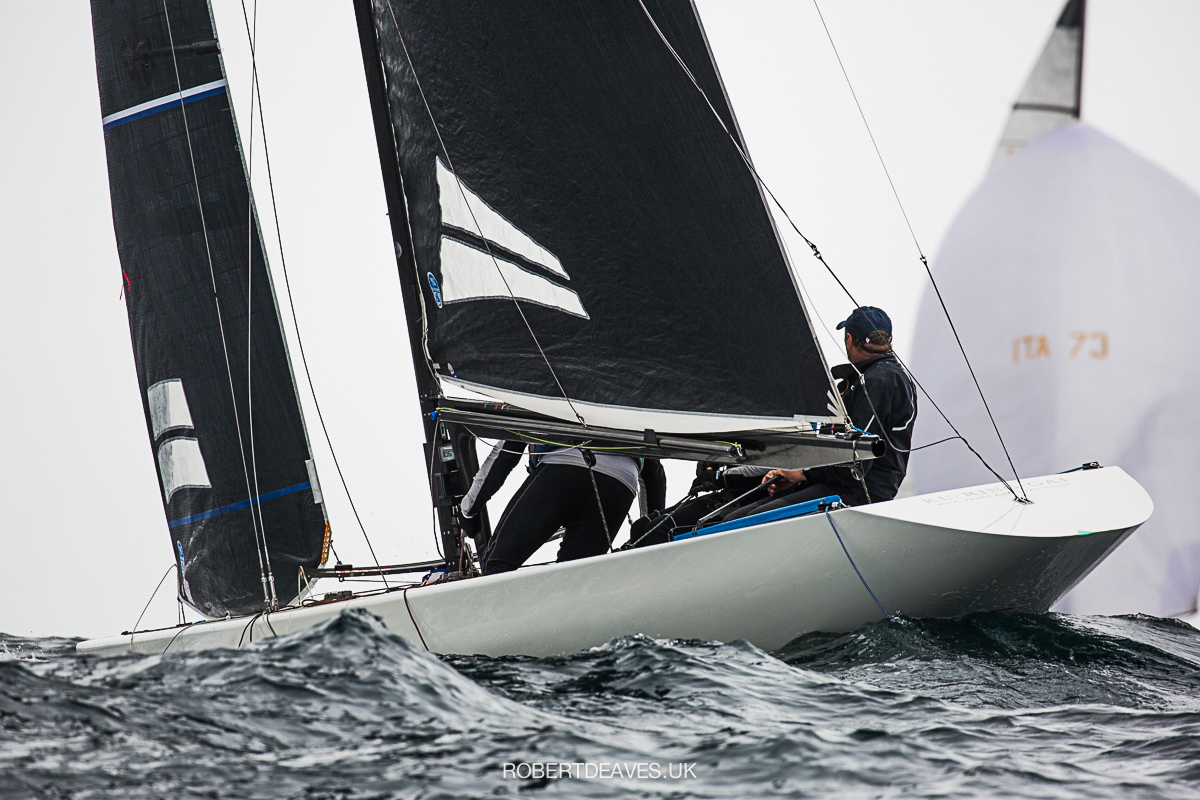 Everyone's thoughts are with those struggling through the crisis and fighting the fires which have devastated much of NSW, Victoria and Queensland and are still burning. 136 fires burn across NSW with 69 uncontained. Though Sydney itself has not directly had any fires the effects of the fires are felt daily in air quality and the daily red sun breaking through the smoke filled skies. To follow current alerts see here.

Artemis XIV won both races on the second day of the 2020 Scandinavian Gold Cup at the The Royal Prince Alfred Yacht Club - RPAYC to take the Cup with a perfect score of three wins from three races.

Artemis XIV (NOR 57, Kristian Nergaard, Johan Barne, Anders Pedersen) won both races on the second day of the Scandinavian Gold Cup, in Newport, Australia, to equal his own record of three consecutive Cup victories. In a first to three race wins format, he dispatched the opposition in just three races. It was a smoky day on the Palm Beach Circle but there was no dust on Artemis XIV as they led the first race from start to finish and then made some great decisions in the second to take the lead twice before sealing the win. 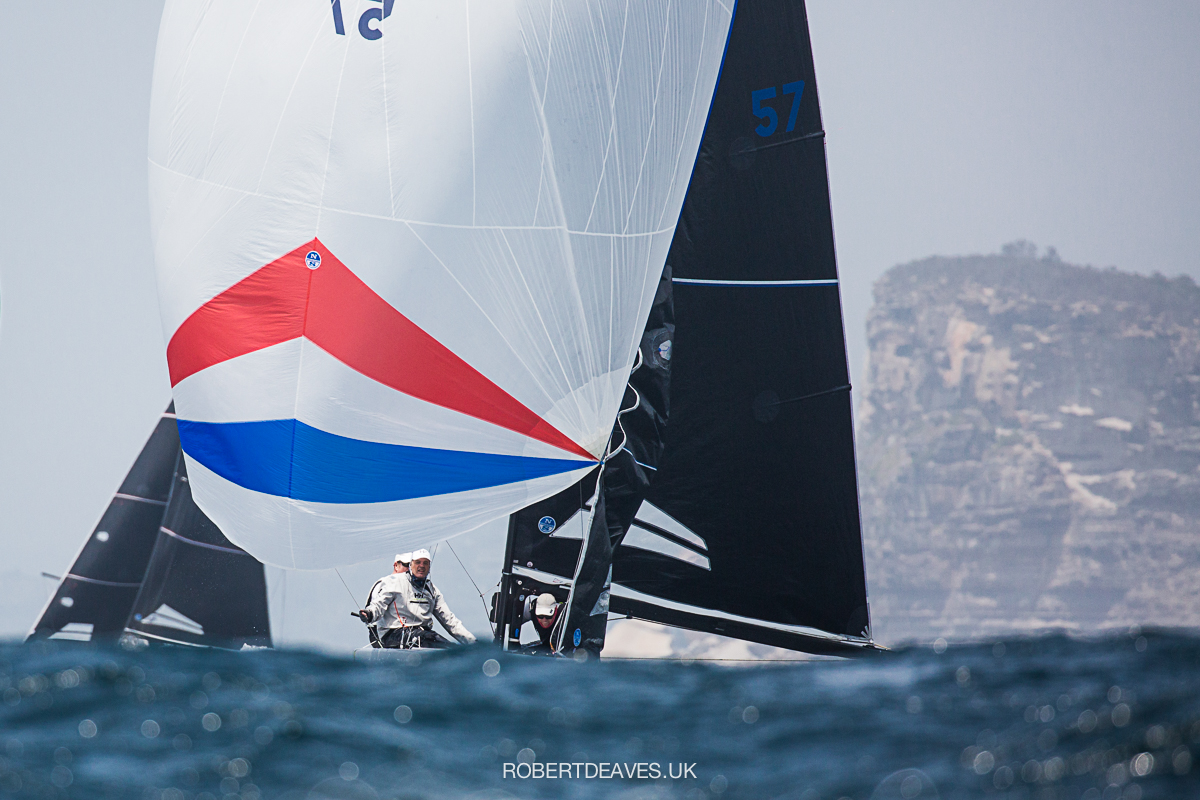 The wind had turned to the south, and built to just over 20 knots, producing some long surfing waves and also bringing with it a lot of smoke from the south-east of the country. The coastline was curtained in a thin haze that reminded everyone of bigger problems further afield.

Nergaard picks up the story, “Once again it was a windy day. We seemed to like that. It was a good swell, with good opportunities downwind to use the surfs, so we liked that.” “In the first race it was going to the left and we seemed to be OK with that, and succeeded with that in the first race, but the Australians tried the right on the last upwind in the first race and actually gained so it was definitely a change from the left in the first race to going to the right in the second ace. There was some better wind and some lifts near the shore.” In the first race Artemis XIV had things much their own way, but winning the pin in both races, were initially held out to the left in the second race. New Moon II (BAH 24, Mark Holowesko, Christoph Burger, Peter Vlasov) had tacked off to the right after the start and but when they came back they crossed the fleet. But it was all very close. At the top, Beta Crucis (AUS 63, Martin Cross, Bob Stoddard, Martin Bunch) held a small lead but Artemis XIV came through on the run and rounded the right gate while New Moon II rounded the left and headed inshore. New Moon II fared best and rounded the second top back in the lead. However, again it didn’t last. Artemis XIV went deep on the run, pulled through and rounded the left hand gate and it was all but over. With New Moon II favouring the left for the first time, when they came back together near the top Artemis XIV had enough of a lead to make a comfortable last downwind to take their third race win in a row and also their third Scandinavian Gold Cup in a row.

The forecast predicted some spectacular conditions with 37 degrees and 20-25 knots from the north-west – an onshore breeze in the Palma Beach Circle. It is a long way from the host club, the Royal Prince Alfred Yacht Club, but was worth every mile with an amazing race in perfect conditions. However it soon turned into a race of attrition with only three of the six boats finishing and most suffering some damage during the day.

Artemis XIV found second gear on the final round to close the gap but couldn’t quite catch Beta Crucis.

But in these conditions it is not over until it is over and Beta Crucis lost their 200 metre lead in the closing stages after broaching on the final gybe to watch helpless as the current World Champion and holder of the Scandinavian Gold Cup, Artemis XIV, sailed past to take the first victory. A long way behind them New Moon II  was also in trouble with a broach and a lost spinnaker.