The final races were completed in the inaugural NSW ORC Championship, the Sydney 38 One Design NSW Championship and Pittwater Regatta, with new champions crowned and winners announced at the Royal Prince Alfred Yacht Club (RPAYC) early this evening.

Gerry Hatton’s Bushranger led from the outset and did not relinquish throughout. The M.A.T. 1245 design added 1-4-3 results to her second and two wins of the last two days to be crowned the inaugural Division 1 ORC NSW champion.

“It was a tough three days,” Hatton’s son Andrew said. “We started off with thunder lightning and rain, then had a good second day with solid winds, and today was light and shifty.

Gerry: “The first race today we did well, the second we were on the wrong side of a shift and the third we got a bit mixed up at the top mark, got behind and had to play catch up, but we did enough to win. It was a fantastic three days. It was exhilarating but exhausting. We are thrilled to win the first ORC NSW title.”

Hatton is still competitive at 85. Apart from son Andrew, he has son-in-law Michael Fountain (tactician) and his son Tom (20), along with Alex Smith, Andrew’s brother-in-law aboard. Renowned boat builder, John McConaghy also sailed with them.

Keiran Mulcahy’s Soozal and Mark Tinworth and Mark Waterhouse’s Mercury did the work required to hold onto their respective second and third places overall.

Soozal, a King 40, finished the day with 2-3-4 results, while Mercury, a modified Farr 40 was at her best on the windward/leeward courses with 3-2-1 results. She lifted up to place one point behind Soozal. The Mark Griffith skippered DK46, LCE Old School Racing, won Race 5 to finish fourth overall.

The new NSW champion in Division 2 is Simon Grosser’s Young 88, Young at Heart. Grosser also led from Day 1 and finished the way he started, adding a second and a pair of wins to his two wins and a fourth from the first two days.

“We had great fun. It was really good to have other clubs come and compete and I hope we can return the favour. For us, it’s about sailing with a bunch of mates that like doing well. It’s an older boat, but as long as everything works and you sail well, you do well. You don’t need be a millionaire to go sailing and it’s good to kick butt on an inexpensive boat,” he said.

Shane Kearns kept the pressure on with Azzurro-White Bay 6, to place second overall, which he carried over from yesterday. Windward/leewards are not usually the S&S 34s forte, particularly in the light breeze and sloppy seas that were offered up today. It was therefore a surprise to see him score 4-2-3 results to finish five points behind Young at Heart.

Mark Hellyer’s Italia 11.98, Cicero, was sitting in third place overall yesterday. She maintained that place by just one point, saved by victory in the first race of the day before scoring a pair of sixth places.

Supported by Sydney Marine Brokerage, the NSW ORC Championship was a three-day affair that started with two inshore races in Pittwater on Friday, followed by a 25 nautical mile passage race on Saturday and ended with three windward/leeward races today. A more diverse range of races and conditions would be hard to find and certainly decided who was the best of the best in the two divisions.

Sydney 38 One Design NSW Championship
Peter Byford and David Hudson (Conspiracy) came into the day tied on points with Advanced Philosophy (Peter Sorensen) which had led overall on countback coming into the day, but the defending champions were not to be denied.

Two bullets and a second place on the offshore windward/leeward courses sealed the deal for the co-conspirators, who retain their Sydney 38 One Design NSW Championship title.

Sorro and his young crew of philosophers could not keep yesterday’s momentum going. Their 3-6-1 results gave them second overall, helped by victory in the final race. Phil Herscovics 8-3-4 meant third overall for Shine On – Team Callendina, but they were challenged by Liz Charles’ all-female crew on Calibre.

Calibre, chartered for Charles and crew by the Sydney 38 Association, placed fourth overall on countback after scoring 2-4-3 results today. Extraordinary, as they are new to the class.

“One of the things the Association wanted to do was to give women the confidence that they could compete in one-design racing, and look what it’s done,” a pleased president, Hudson, said.

“We had experienced and new people racing, but everyone was very in touch. It was a lottery around the top mark this afternoon. The ladies on Calibre did very well and so did Phil Herscovics. I’m delighted for them.

“We are happy to keep our title, but we like to be challenged. Make no mistake, it was very close racing on both days for the entire fleet. The difference in some races was the length of the bow, and in yesterday’s Race 2, it wasn’t even that much.

“Everyone has had a really good regatta. Each has done well, especially given it was difficult sailing offshore today. To keep the boats moving demanded a lot of hard work and attention. It was even hard for officials to set a course in the light winds on a big sloppy sea.,” Hudson ended.

Pittwater Regatta
Participants were given two passage style races around Pittwater on the final day. Michael Ritchie, who came into the day in second place overall with the Ritchie 38, Revolver, designed by his father Bruce, won the first race. However, there was no denying Heath Walters (Banta), who added a further win to yesterday’s two victories to claim the series from Revolver by three points.

Walters had the advantage of his two young sons, Harley (24) and Logan (18), on the crew of his Melges 24, along with their two mates, Liam and Mitch. The ‘young guns’ made up for the disadvantage of being one of the smallest boats in the fleet.

“The boys have been sailing the Melges with me for years. They loved the weekend, and so did their mates. It was great having younger guys on board,” he said shoreside.

“It was a very light shifty breeze with a maximum of 10 knots, so it was hard work trying to keep up with the Farr 40s and other big boats, but we worked hard,” he said.

“We were in the same division with my sister-in-law (Susan Walters with her Cape 35, Cape Fear, who finished fourth overall). We’re not a very competitive family,” he said, tongue in cheek.

“It’s good to have the Melges out. We only got our ORC rating in the last week and I like it, especially this weekend, because we won! It helps having local knowledge too.”

Bob Stoddard’s Alpha Crucis, completed the top three after scoring third and second places respectively, moving the 5.5 Metre right up the board.

In Division 2, Chris Hornsby’s Pick Pocket made it a clean sweep, robbing the rest of the division by winning both races today, adding to yesterday’s two wins. Vittoria (Alan Reece) and James Pattinson’s Ellipse II, also mirrored their performances of yesterday, scoring a pair of seconds and thirds respectively, to finish in that order overall.

“We just carried on from what we did yesterday,” Hornsby said after putting his Gary Mull designed Pocket Rocket 22 to bed.

“The weather was good, it just suited us. And we have a good crew. John Priddis, John Marwood and I have sailed together for ages. We’ve done 20 Hobarts between us and raced Etchells and Dragons. After a while you start to get the idea… Julia (his wife), is a director of the Club (RPAYC) and she always sails with us. She keeps us all in line,” he said laughing.

“We are very happy to have won both ORC and PHS. It’s not often that happens.”

The last word goes to Richard Hudson, a longtime member of the RPAYC and supporter of youth sailing at the Club: “The young crew sailed very well. I really enjoyed the weekend, even though we didn’t do as well as we’d have liked. The Club ran a very good regatta.

“We’re now getting the young crew ready for the Pittwater to Coffs Harbour Yacht Race. A lot of our crew are younger than the boat, which is 25! I love sailing with them,” he ended. 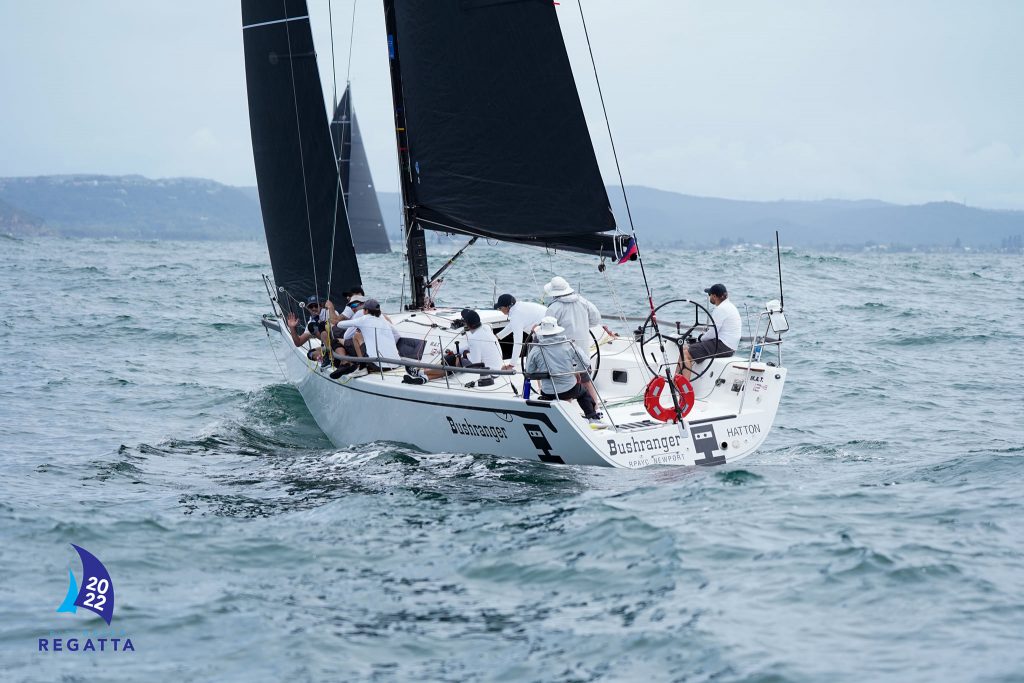 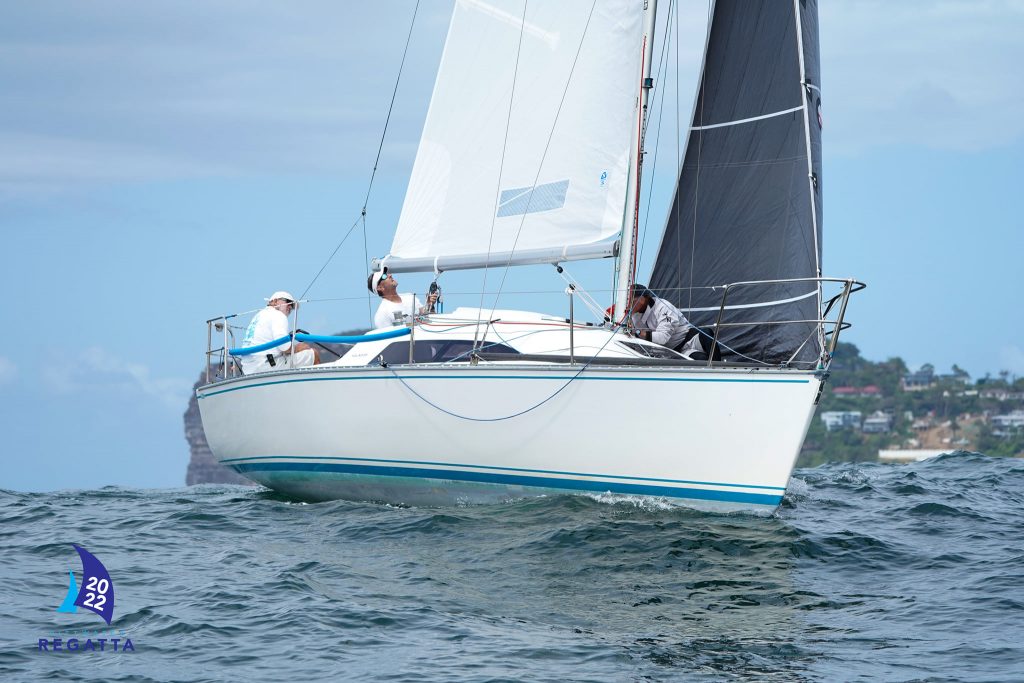 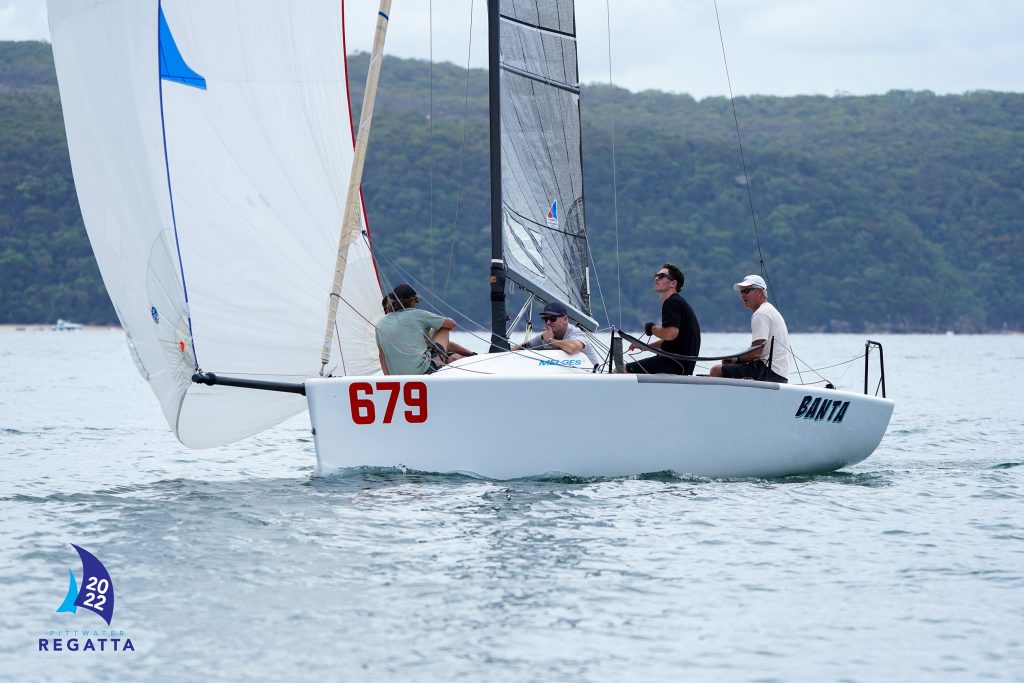 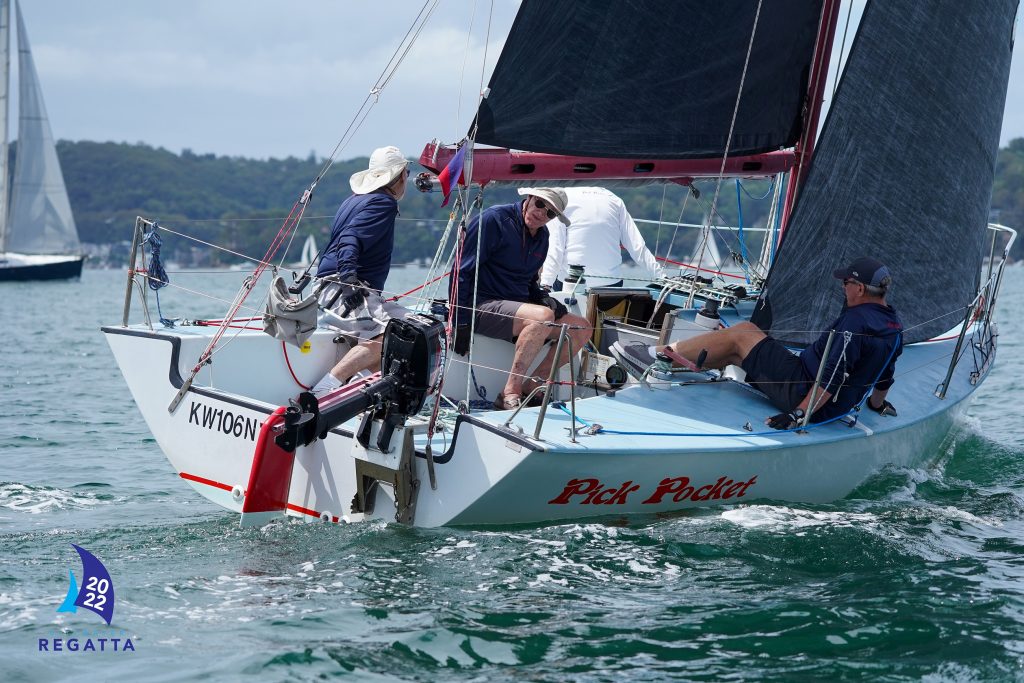