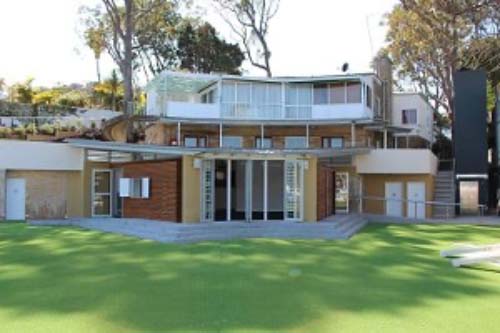 The centre has being re-developed and will provide services to the Club’s Centreboard activities and training services to all members.

In 1956 Jack and his wife Joan became the caretakers of what was then Royal Prince Alfred Yacht Club – Pittwater division. Jack, Joan and their family occupied the old staff cottage which stood on the land occupied by the Bosun’s Locker and other tenancies.

Jack slipped vessels; cared for the Club’s vessels; assisted in the construction of a larger slipper and extensions to the boatshed; acted as a night watchman and boat minder and on Saturdays acted as a barman and most importantly collected the meat pies from Van Stralen’s cake shop in Newport. Jack sometimes found time to sail in the odd race or two as well as acting as the shepherd of the Club’s collection of sheep.

His wife, Joan assisted in her own quite way by doing the worrying for everyone, the laundry for the Club and caring for the odd injury and generally kept things humming.

Jack built a strong relationship with members of the local community and laid the foundation for what has developed into a great respect for the Club. Pittwater at the time was a much quieter place than it is today. Jack earned the respect of all the local boatshed owners, local police and waterfront owners who knew that if assistance was required they could count on the Club.

In August 1958, Jack was appointed as House Manager, responsible not only for the traditional areas of house but also for the Slipway, Boatshed and grounds. I recall that he occupied an office on the first floor of Moonbar.

During this period as House Manager, Jack organised most of the Club’s social occasions, including gambling nights, Melbourne Cup parties, dinner dances and Christmas parties. He also refined his recipe for the Christmas punch!

Jack was actively involved in planning for the construction in 1962 of the first “A” marina and what was then known as the 5.5 hardstand or the Green Point Hardstand which is what it is called today