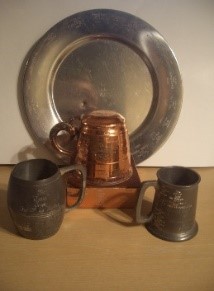 Origin and History of the Whisper Mug

Information provided to Angus Gordon by Neville Fielding prior to his passing in February 2020.

Background:
Sue and Neville FIELDING moved into the cottage named ‘Grans’ at 146 McCarrs Creek Road Church Point in mid 1971. Most of their friends were mad keen sailors and for the pre-Christmas party in 1972 they hatched the idea of a private yacht race to be followed by festivities at ‘Grans’ where there would be a presentation of trophies and the amiable consumption of ‘side bets’. Entry was by invitation.

These were issued to boat-owning friends. The first invitation, to the 1972 race could best be described as being of ’heraldic’ form, starting off with a ‘Hear ye, Hear ye’. A copy of this historic, and amusing document, composed by Neville, still exists and is retained in the RPAYC Archives. The invitations for the following races were somewhat less flamboyant although Neville’s beautiful cursive writing persisted and provided character. The invitation also requested that, for handicap allotment, the entrant provide either the TCF on the current IOR certificate for the yacht or the entrant fill in the required measurements as detailed on the entry form attached to the invitation; a fairly comprehensive description of the yacht characteristics. Again, a copy of the typical invitation and required entry details is retained in the RPAYC Archives.

Why Whisper?
Whisper was a 30 foot LOA fractional rigged sloop designed to the 17 square metre rule; substantially based on Peter Cole’s Avenger class but modified by her builder and original owner Jeff Clist. Subsequently she was owned by Neville and Sue Fielding, in partnership with John Quinn. She sailed only the first three races being second on handicap all three times. She won the Zebulon plate in 1973.

The History of the Trophies:
The ‘Whisper Mug’ was the prize for the first yacht on handicap while the line honours trophy was named the ‘Zebulon Plate’; Zebulon being the middle name of Sue and Neville’s son Scott who had been born in July 1972.

Over the years trophies and prizes for the various places have come and gone but in addition to the ‘Zebulon Plate’, and the Mug itself, two other perpetual trophies have survived. The ‘Josie Trophy’ for second on handicap was donated by John Quinn and named after the Fife designed 47 foot yacht ‘Josephine which was once owned by John’s father Harry and was subsequently sold by the Quinn family to Robbie Cuningham. John and Neville enjoyed a great many of the early sailing days in her.

The official starter for several of the early races was a non-sailing friend of the Fieldings, Jim Pardey. Jim always donated a bottle of wine for the boat placed third on handicap but there was originally no perpetual trophy. That came into being after Neville skippered his friend Peter Curtis’ yacht ‘Eric the Red’ in an Institute of Architects Picnic Yacht Race. They won a pewter mug, appropriately engraved, but couldn’t decide on who should keep the prize. Peter solved the problem by donating it to the Whisper Mug event. He dedicated it to Jim Pardey and the importance of the Starter’s role by having the Institute of Architects words crossed out and ‘Starters Cup’ inscribed on the other side.

Perhaps now-a-days inappropriately, but just for completeness of the history, there used to be a ‘Booby Prize’. This was a crockery mug with a porcelain pair of ladies breasts attached in such a manner that they swung when the mug was tilted. Reluctantly recipients had to use the mug to down the contents of a warm bottle of beer. Perhaps fortunately this perpetual trophy didn’t survive the pre-Random Breath Testing ‘Grans’ parties.

The RBT had a profound effect on the after-race parties. It had been usual for people to not leave ‘Grans’ until after midnight but the first race after the introduction of RBT saw the house empty by 6 O’clock.

Early Sailing Instructions:
The race was to start and finish in their ‘home port’ of McCarrs Creek. The course was to Dangar Island and back…….. a favourite Sunday sail Neville had often enjoyed with Robbie Cuningham in his yacht Josephine, and later with Sue in Old Rob’s yacht Seal.

Handicapping:
In the early years the handicaps were calculated using either the TCFs from the IOR certificates or Merv Davey’s ‘Short Measurement Rule’ which approximated the IOR TCFs and relied on the detailed yacht measurement that had to be submitted as a requirement of the race entry form attached to the invitation. As time went on however, entry numbers and changes to the international rating rules made ‘measured handicaps’ impractical so handicapping reverted to arbitrary/performance systems.

It is rumored that, from time to time, some competitors have attempted to encourage the Officer of the Day to ‘assist’ with their handicap by offering the OOD a liquid refreshment, but such advances have been strongly rejected by the OODs…it is rumored (probably wouldn’t stand up to rigorous cross-examination of the OOD).

The Race:
The concept was in a sense a nostalgic reach for a past era when people used, and enjoyed their boats, in a more genteel manner than the increasingly more impersonal and combative affairs which club division racing had become.

The first race had a fleet of seven and was held on Sunday, 17 December 1972 a date which enabled yachts from Sydney Harbor to complete their spring point score and venture north for the holidays.

The race continued to be held every year, as was the associated the Christmas Party at the Fielding’s, up to and including 1983 but by then, with a fleet grown to 19 it became a bit too big for the party to be accommodated at ‘Grans’. Because of this it almost lapse, but by participants demand, and with the assistance of neighbours Bob Goodie and the Potger family, the 1984 race eventually went ahead. That was the first year the prizegiving was held at the ‘Mudflats’ (McCarrs Creek Reserve).

As a resident of McCarrs Creek, Bob Goodie ran the race in 1985, 1986 and 1987 but when he and the Fieldings moved away, during 1988, the baton was taken up by long time participants and McCarrs Creek residents Rick and Judy Welch. The Welchs conducted the event up until 2002 when it was overtaken by the State authorities requirements for formally registered yacht racing courses (club based Aquatic Licences), and the need for race organisers to have appropriate insurances. In 2002 Rick was on the Board of Directors of the Royal Prince Alfred Yacht Club, a club both the Fieldings and the Welchs were members of, so in order to assure the continuance of the event Rick took the opportunity to request the Club consider adding the Whisper Mug to its schedule of racing events. The Commodore of the day, Ross Schoble, and the Board of Directors were delighted to do so hence, ever since 2002, the RPAYC has conducted the event with Club volunteers manning the start and finish, and the prize giving held at the Club.

Surprisingly after all the years since 1972 very few races have had to be reduced to a shortened course. The first time this happened was the second time the race was run, in 1973. The race was shortened by rounding the old permanent buoy at Juno Head because there wasn’t enough wind to reach Dangar Island. That was a far cry from the 50 knot southerly which tormented the fleet in 1974. The damage was extensive and not one boat escaped unscathed. But the notorious wind ‘hole’ at the back of the island still trapped yachts, as it does today!

On one occasion Dangar Island was ‘out-of-bounds’ as the Hawkesbury River, from Brooklyn upstream was ‘closed’ by authorities in order to facilitate a major speed boating event. On this occasion Dangar Island was replaced by the Juno Head permanent mark in the sailing instructions. There have also be a few occasions when the wind was so light that a shortened course had to be instituted during the race by making Lion Island the turning mark.

More recent Sailing Instructions:
The Start has been moved to ‘the mouth of McCarrs Creek’, actually between the mouth of the Creek and Scotland Island. The finish is ‘in the vicinity of Bayview’, which is a term liberally interpreted by the Officer of the Day, and so can be anywhere in Pittwater! But generally south of Longnose Point.

Because some yachts elect to ‘race’ non-spinnaker, and just enjoy a days sail, the race is now separated into two divisions with the spinnaker division racing around Dangar Island and the non-spinnaker division racing around the permanent Juno Head mark.
Given that there are years when the breeze does not favour a ’trip’ to Dangar, the Sailing Instructions have now been varied to state that ‘if the leading boat cannot cross a line from Barrenjoey Lighthouse to West Head by 1245hrs; Lion Island to port shall be substituted for Dangar Island or Juno Point AND after rounding Lion Island proceed to the Finishing Line.
The decision to shorten the course will be left to the skipper of the leading boat and they shall draw attention to the decision by announcing it on VHF Channel 77 and by flying a white flag from their standing backstay. All other boats shall follow that lead ‘.
Prize giving and the opportunity to ‘re-live’ the race (aka tell lies, and cry into beers) is, as previously mentioned, now held at the Royal Prince Alfred Yacht Club after the last boat finishes….and given the diversity of the fleet, from top racing 40+ footers to casual club sailed 20 footers, the leading boats can have an excellent opportunity to ‘enjoy’ the Clubs ‘hospitality’, for several hours, while awaiting the results.

Acknowledgement:
Thanks to Nev for providing me with his notes, records and memories and for reading through, and correcting, this document. Needless to say any remaining errors are mine. All the documents Nev gave me have been lodged with the Archives Committee to preserve the record. Unfortunately shortly after Nev read through this document he passed away. Nev is remembered by all of his friends as a quiet, intelligent man who was a cleaver sailor, but most of all a good bloke and enjoyable companion. Vale Neville Fielding.
Angus Gordon OAM
December 2020