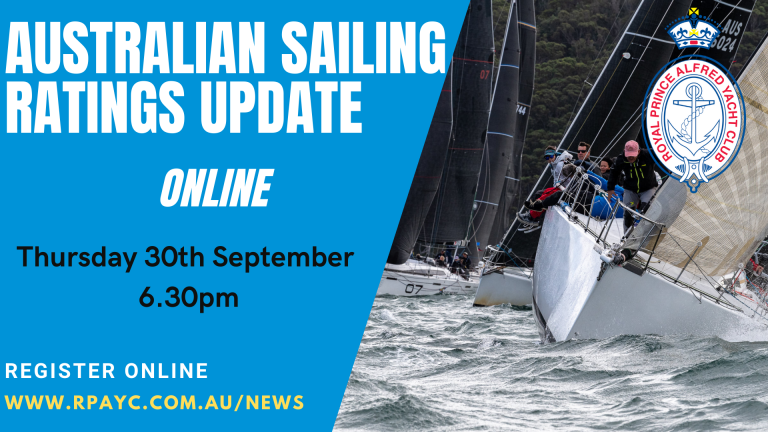 With one of the largest ORC fleets at any one club in Australia, the Royal Prince Alfred Yacht Club (RPAYC) situated on Pittwater in Sydney, is seeing an ever-growing trend of club boats acquiring an ORC Rating, through the Australian Sailing Ratings Office.

With an increased number of perpetual trophies set to be awarded on ORC results this season, plus the RPAYC recently being announced as the inaugural host of the ORC NSW Championship, ORC is firmly established as the chosen rating system, for owners seeking to sail their yachts and test their crew skills on an equal scoring field at the club.

ORC at the club will this season continue to be the key performance indicator across all Club racing, including the Club Marine Bluewater Pointscore, to the Pittwater Inshore Series on Saturday’s, as well as mid-week twilights and right through to the popular Wednesday afternoon non-spinnaker Series.

In the lead up to a season full of ORC racing opportunities, the RPAYC Sailing Office has arranged for Chris Zonca, Australian Sailing Ratings Manager, to provide a timely ratings update for members on Thursday 30th September at 1830hrs.

Notably, an ORC rating can help a boat and its crew understand the potential of a boat’s performance, including providing information on target speeds across a range of wind speeds and angles, as well as providing an excellent platform for racing a variety of designs together fairly.

Unique to ORC and for certificates issued in 2021, a boat can now be issued an ORC Certificate in three different configurations; with spinnaker, without spinnaker (Non-Spin) and double handed.

A boat may now hold all three certificates at the one time, although can only race in one configuration in a Series, or as outlined by the Notice of Race and Sailing Instructions. The RPAYC Wednesday fleet in particular, will need to request the Non-Spinnaker Certificate at time of renewal, or upon their first application with Australian Sailing.

Nick Elliott, RPAYC Race Director, remarks, “We have definitely seen year on year growth, with boats now choosing to race under ORC at the Club, with plenty of boats having already submitted their ORC documentation to the Sailing Office for this season, in anticipation of racing getting underway again soon.”

The club is also gearing up for a large fleet of visiting and club-based boats, for the first edition of the Sydney Marine Brokerage ORC NSW Championship, scheduled between 11th and 13th February 2022. The Championship will run in conjunction with the well-established Pittwater Regatta.

The ORC NSW Championship will see racing conducted over the full three days, split into divisions, with a variety of racing formats planned, including inshore, offshore and windward leeward. There will also be racing throughout Pittwater and the Broken Bay Estuary over 2 days, for the remainder of the ORC fleet.

“The Club is very excited to be hosting the inaugural ORC NSW Championship in 2022 and we certainly have the uncongested race areas and race management to run a top-class regatta. The club is looking forward to welcoming a number of visiting boats, which should make for a fun and enjoyable addition to the racing calendar in NSW”, commented Elliott.

The 2021 Pittwater Regatta made for a right ‘royal-rumble’ on ORC, with RPAYC based foes BUSHRANGER (Gerry Hatton) and SOOZAL (Keiran Mulcahy), battling in close hand to hand combat for ORC supremacy at the event. SOOZAL emerged the victor of the two, on a point scoring tie break, but both boats will surely be looking to resume their rivalry in 2022.

It is clear, ORC is certainly gaining momentum and not just on Pittwater, but with more clubs and boats too, both in Sydney and Melbourne, all seeing the benefits that ORC brings to events.

With the hope that organised yacht racing in NSW will soon be given the green light to recommence, the RPAYC will certainly be crowning many more ORC Champions in their annual point scores this season, plus, rolling out the red carpet for all comers next February, for the inaugural ORC NSW Championship.

The Inaugural Sydney Marine Brokerage ORC NSW Championship, with Royal Prince Alfred Yacht Club as the Organising Authority, will be conducted on the waters of the Tasman Sea and Pittwater, scheduled for 11th to 13th February 2022.

For more information, view the Notice of Race and Entry Online early at https://rpayc.com.au/sailing/regattas-championships/