The Alfred's is proud to be supporting the Firefighters Family Sailing Day with Above and Beyond Boating. The Club is a hub for the RFS Firefighter Family Day on Sunday 15 March 2020.

Across Australia our dedicated fire fighters are stretched to the limit with the terrible bushfire season. They are working tirelessly to keep our homes, friends, family, wilderness and wildlife safe, often at a huge cost to themselves and their family.

The Firefighter family day on the water initiative was created by Above and Beyond Boating to provide a way for the boating community to give back to the men and women who are battling blazes across our country.

Firefighters and their family can register to attend one of the events and enjoy a day out on the water with one of the volunteer skippers who are lending their boats for the experience.

Multiple events are being planned for various dates and locations around the country. To be part of this great event register here: https://aabboating.com/firefighters/

We currently have 17 boats registered to take families out from RPAYC and 2 registered families. The maximum number of boats is limited to 30 at each hub.

All registrations and queries or changes to registrations should be fielded back through Neil and the team at Above and Beyond Boating. ABB will link the boats and families and arrange a meet and greet and introductions at the club with a planned departure at about 1000hrs.

On arrival at the club will be providing a breakfast BBQ – sausage sizzle / bacon and egg roll for the any boat owners and the families.

Boat owners are being asked to supply a light lunch for the families at their expense.

Tristan & Beau achieved a 3rd place overall with two race wins and solid finishes throughout the event with their worst result of only 13th in a fleet of 29 boats onboard their Goodall C2.

The regatta was characterised by high speed racing in gusty shifting winds off the land. Their experience from racing on Pittwater and sailing the smaller F16s at club level assisted them in working their way to the front of a very competitive F18 fleet that included three teams that finished in the top 10 at the F18 Worlds in Spain last year.

Tristan & Beau report that ‘There is still much work for us to do as a team for the F16 National Titles in March at RPAYC and the F18 and F16 worlds in Italy later this year’.

What a busy weekend for our RPAYC Centreboard Sailors. 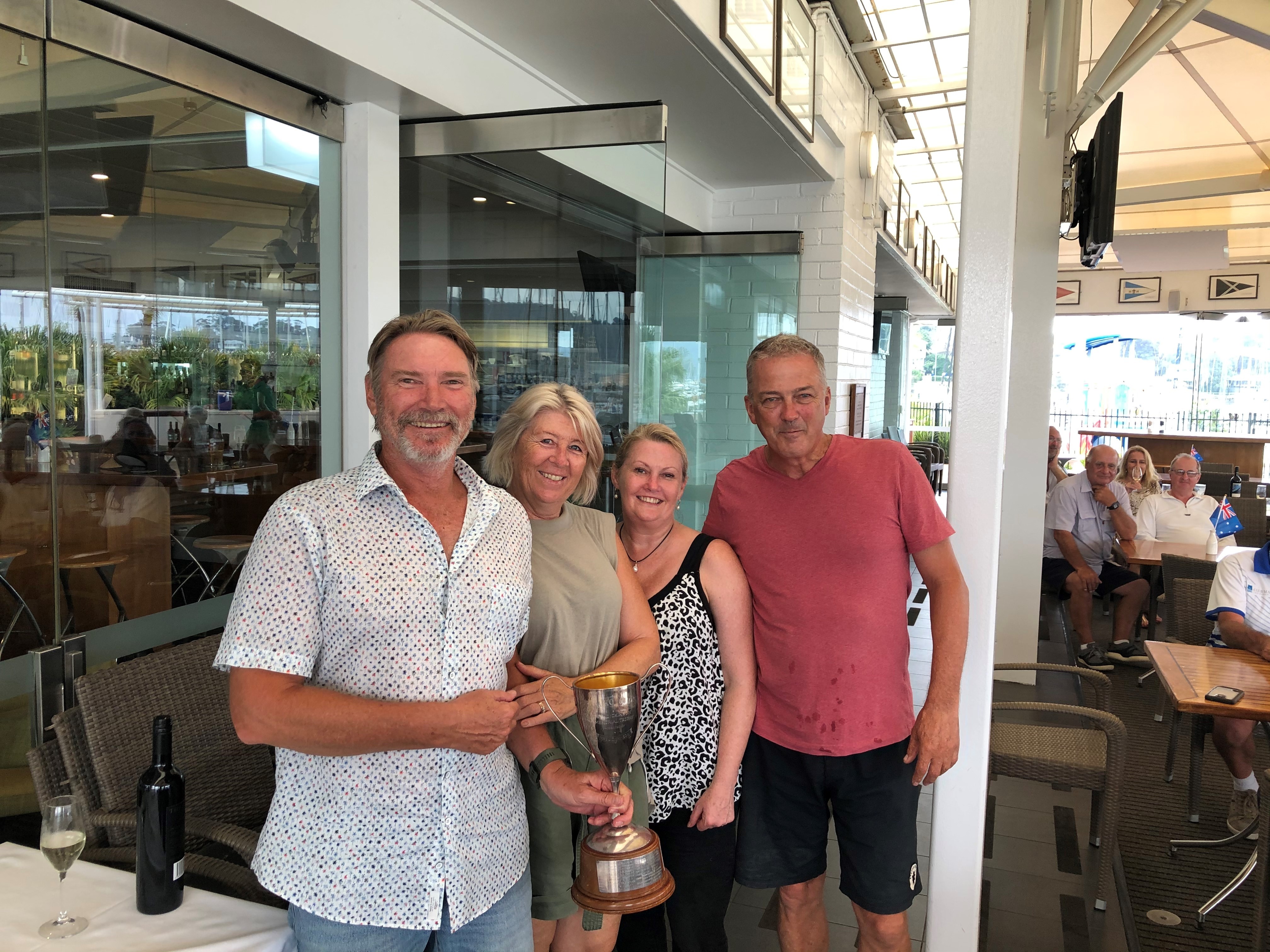 A beautiful sunny Saturday greeted the 22 boat fleet, with a variable light easterly breeze blowing.
With the risk of a few holes about, the Race Officer changed the course to "0" - Start then finish off Challenger Head.
A competitor told me later, they even took an enormous risk and decided not to write the course down!
The two Farr 40's, Windy Too and Harlequin, were spot on time for the start and quickly gained the lead, followed closely by Enza and Pacesetter.
Spinnakers were set as they passed West Head for the run up the river. One even partook of a wine glass!
The Hawkesbury was in full outgoing tide and with the easterly breeze still fickle, we saw many vastly different tactics appear in the run to the finish.
Line honours went to Windy Too, and over the next hour and a half the remainder of the fleet finished.
Back on the beach for the presentation the competitors got together and enjoyed a cool drink whilst the results were tabulated.
With sausages sandwiches being cooked on the BBQ and cool drinks in hand, it was soon time for the presentation to begin.
The Dicko Cup race winner for the day was Enza, followed by Starlight 2nd and Waterbird 3 in 3rd.
The casual race winner was Windy Too.

Sunday brought another wonderful sunny day to celebrate Australia Day.
This year RPAYC worked with the Avalon Sailing Club to promote their Australia Day Regatta with their keel boat race being finished by Alfreds 1 off Challenger Head.
The club's coach Tom Spithill also arranged for some Windsurfers and Hobie Waves to be brought to Hallets Beach, and with the help of two club instructors,
guidance given to members on how to use them.
I missed a lot of the efforts, due to finishing the ASC boats, but I understand it was entertaining for both those trying and those not.

Overnight a welcome cool change arrived, but it didn't last long and the Race Officer had to postpone the start whilst the pin boat went up course to
find suitable breeze for a start.
The start was moved half a nautical mile closer to Flint and Steel and the postponed start held in an 5-10 knot ESE.
Shortly after the start the fleet was split equally over the course.
It appeared that Enza on the left would have to tack out but after passing Patonga the breeze went to the SE so they got out of jail and lifted to Lion Island.
But this shift gave Verve on the right a bigger gain as they were able to ease sheets straight to the island, closely followed by the rest of the fleet.
From this point on I understand there were numerous close tussles, but Alfreds 1 had to leave and set up the finish, so I will leave the tall tales to others.
Line Honours went to Verve, followed by Enza and Still Dangerous.

Back at the club for the presentation of the "Dicko Cup", first the day's race results:
1st was Still Dangerous, 2nd Boree Creek and 3rd Out of the Bag.
Next prize was the "Passion Pop" award for Navigational Excellence, presented to Galadriel; David and Sonya Williams.
If you want to find out what that's all about you need to join us next year.

A big thank you to my team of Elaine Fowler and Wendy Kay.
Without you ladies it's just hard work, love you both.

Finally to the overall prizes, 3rd went to Out of the Bag (also 1st Multihull) Bill Webb, 2nd to Fontana, Rod Walton, and the
overall winner of the Dicko Cup; Verve. Owners John and Jo Groves, with good friends Warwick and Sue Crossman as crew.

So why don't you join us next year?
This year we had as many new comers as repeat competitors, and it's not just about the racing.
It's a good opportunity to meet other members and experience one of the worlds most beautiful waterways.

See you on the water.
Allen Stormon

Nathan Bryant  has just returned from the Australian Nationals and Youth Nations where he and his skipper Georgia Payne were honoured to take out the title to represent Australia in the 2020 World Sailing Youth Worlds regatta to be held in San Salvador, Brazil.

'We started the year with a bang! Georgia Payne and I have just finished the first regattas of 2020 in the Nacra 15. After a tough few weeks of racing on Port Phillip Bay we've managed to secure the spot to represent Australia in the 2020 ISAF Youth Worlds regatta to be held in San Salvador, Brazil'. 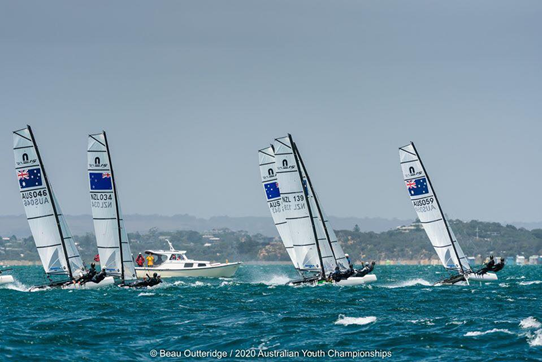 We're incredibly thankful to be given this opportunity to represent Australia, it is a great honour to be able to participate and represent your country in any sport.

We are so proud of what we have achieved so far in the Nacra 15 as we’ve only been sailing together in the Nacra for the last 11 months.

Congratulations to all the sailors as there was some extremely tight racing. We experienced some tricky conditions from high winds and chop to no wind and heavy smoke. We were lucky to be racing and enjoying our sport when so many Australian were suffering far more challenging situations than we were. Thank you to the race committee and all the volunteers for running once again some great regattas.

The first round of regattas in 2020 are done and dusted!! 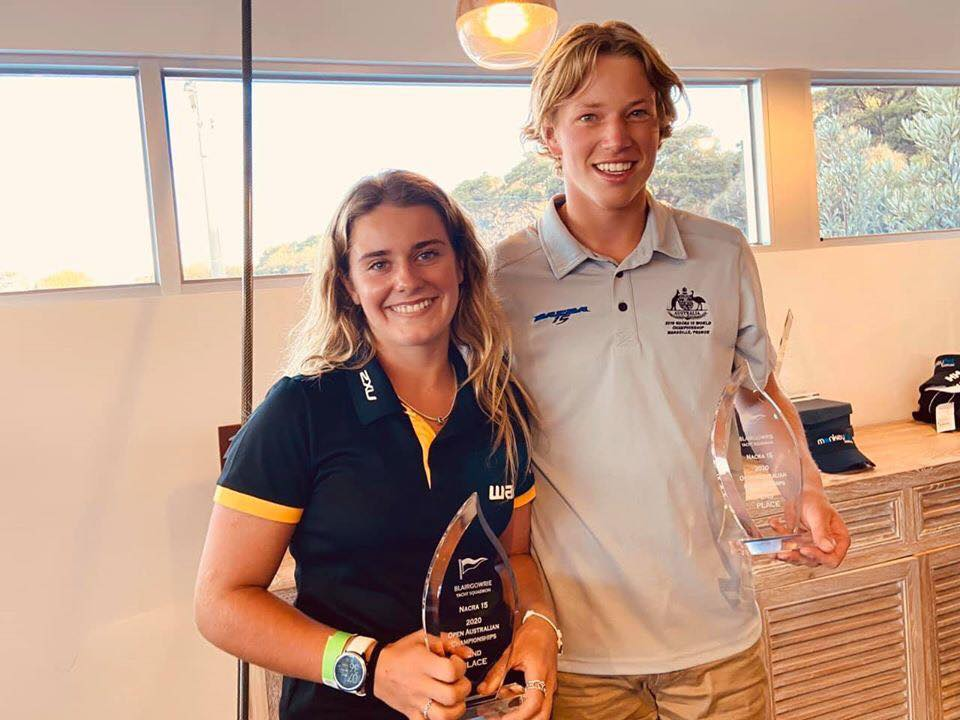 Nathan Bryant and Georgia Payne represented the RPAYC and Georgia’s home club of SOPYC, when competing in Blairgowrie in Victoria in the 2020 Australian Nationals . The team took out the silver medal in a hard-fought battle where all 3 top teams had a day of being placed at the head of the leaderboard!

Racing alongside Nathan Bryant was Bella Green and her crew Josh Whitten also from the RPAYC who also had a great 4 days of racing too.

Nathan and Georgia started the regatta with 2 bullets on the first day and ended with two bullets – awesome effort. Lots of lessons learnt and with a day’s rest now before heading into the final regatta, the Australian Youth championships. This will be the decider for which team goes forward to represent Australia in the 2020 Youth Worlds to be held in Brazil at the end of 2020.

Good luck to all competitors!!