The Dicko Cup originated in early 1950s by S.R. Dickinson whose role was the organiser, handicapper, judge and sailing committee for the “Dicko” Cup. Originally being held on New Year’s Eve and continuing onto New Year’s Day the event started as a fun loving event with no prerequisites to enter only a “carnival spirit.” Boats from all over Sydney would migrate to Pittwater to enjoy the company of Dicko and his wife as they were renowned for their hospitality.

Nearly 60 years from when the Dicko Cup started the RPAYC still celebrates this event based around the roots of the “carnival spirit.” The event has transformed into the Dicko Cup Marathon & Hallets Beach Cruise for the Australia Day weekend.

A 10 – 12 knot southeast breeze greeted the fleet and gave a great spinnaker run down Pittwater with the yachts zigzagging between Towlers Bay, Stokes Point and then across Broken Bay and out and around Lion Island.

The transition around Lion Island saw yachts change position several times, whilst Revolver sailed away from the fleet to get the gun at Challenger Head.

The beach party and presentation on Hallett’s beach Saturday evening was delightful.

A beautiful day greeted the fleet of ten yachts on Sunday morning for the return race to Pittwater. Another ten knot SE breeze was on offer for the race home. A rain squall in Pittwater split the fleet with King Tide making the best of the changing conditions to take line honours for race 2.

The final tally of results for the two races over the weekend saw King Tide sailed by Jenny Danks as the winner of the Dicko Cup for 2022, followed by Nirvana’s Kitchen sailed by Leon Wilson 2nd Puff sailed by Scott Robertson 3rd.

Thankyou to Rob & Virginia McClelland and Elaine Fowler for their time as Race Management over the weekend. 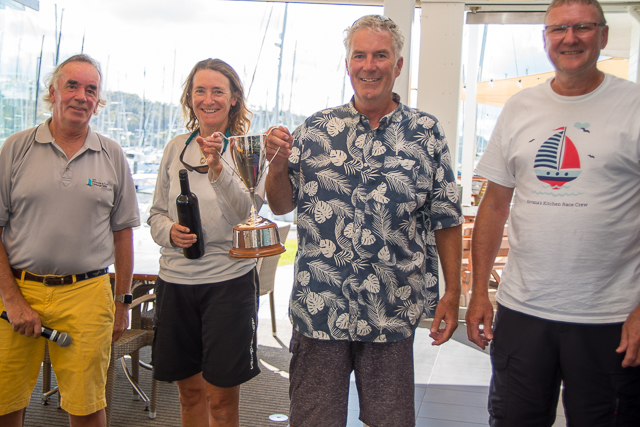