The Alfreds will be represented by two teams this week over in New Caledonia, for the Air Calum Match Racing Regatta, held out of the New Caledonia Yacht club (CNC). 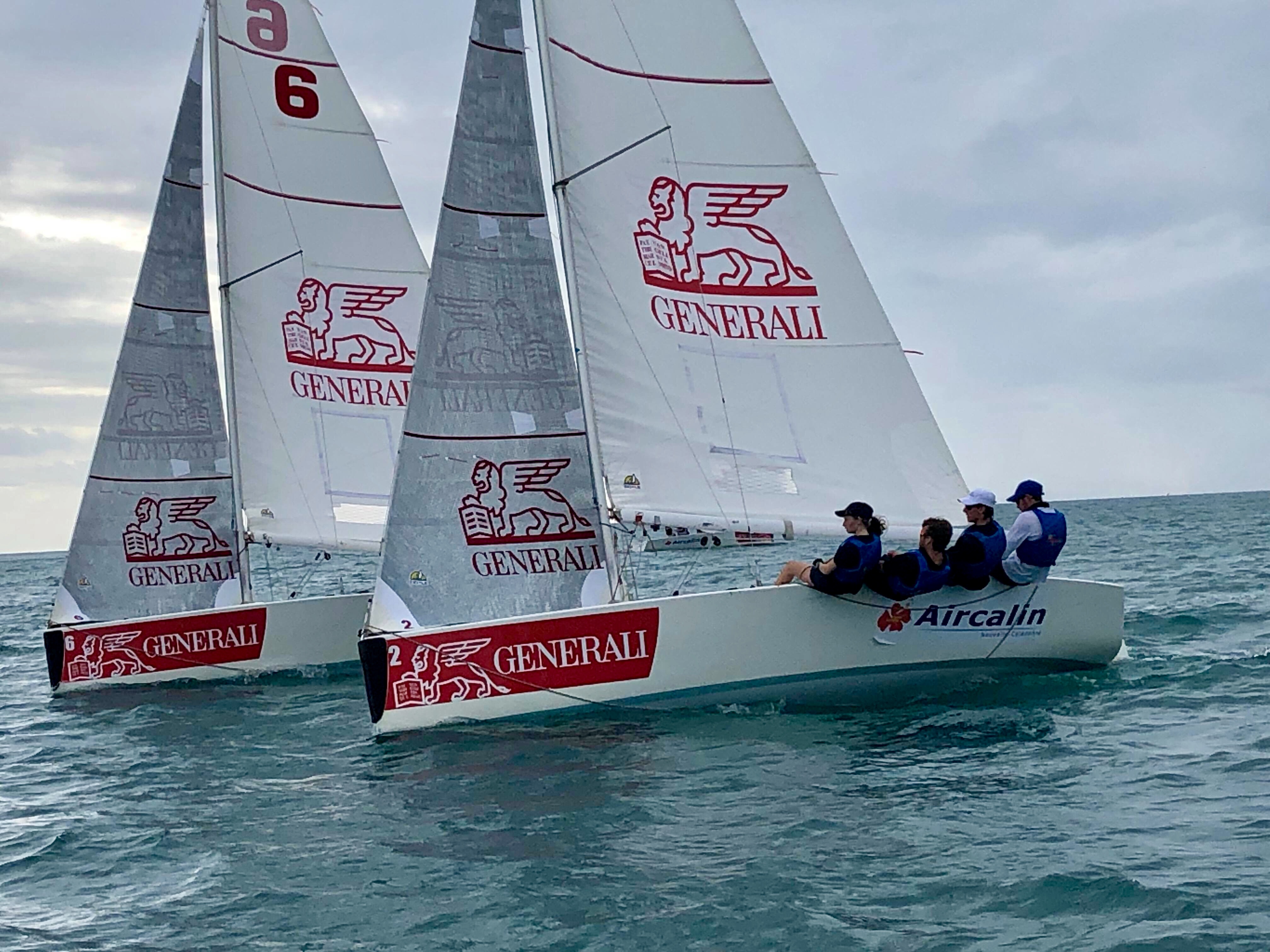 Club yachtsman of the year Chris Way also decided to have a bit of a dabble, trying his hand at match racing, after enjoying it so much in the clubs prestigious David Lukins Me

Day 1 got underway in a 18 knot south easterly.

Ted Anderson, (the race officer) made it clear to be prepared for a long day, and it certainly ended up being the case. With 26 flights in the round robin, the racing continued from 1000 throug

Powers and his team had a pleasing day with 3 wins and 2 losses. The last race of the day proved to be a nail biter with Powers and his crew undertaking a penalty turn right on the finish line to win by the smallest of margins. “Not a faultless day for us, but all in all it’s been very encouraging the way we have started to build as a team” Commented a reflective Powers.

Chris Way and his team were exciting to watch, with sudden strokes of brilliance and some other “interesting” manoeuvres. One such moment was receiving his first ever Black Flag, when Tom Picot CNC got three penalty turns on him in the prestart.

However Chris managed to then produce an upset in the next match by beating the top ranked youth crew from the RNZYS to finish the day with 3wins and 3 losses.

The Royal Prince Alfred Yacht Club (RPAYC) in Sydney and the Royal New Zealand Yacht Squadron (RNZYS) in Auckland, have named Australia’s most famous sailor, James ‘Jimmy’ Spithill and one...

Sydney to Auckland Ocean Race 2021Media Release – 26 July 2019   The Royal Prince Alfred Yacht Club and Royal New Zealand Yacht Squadron are excited to announce that the Notice of Race for the...

Well we had the last of the Flights today to decide the top eight boats to advance to Quarter Finals. Pressure was on both Juliet Costanzo and Niall Powers teams...

A beautiful day in Wellington today after travelling from Sydney yesterday. The team including Cameron Whiteside Alistair Read, Jemma Hodgson and Jasmine Bridge have all been warmly welcomed here in...

Congratulations to Scott who has been announced as one of the 32 current and former serving ADF members to the 2020 Invictus Games.Invictus Games The Hague 2020 will be held from...

Congratulations to Micheal & Lachlan Ritchie, Revolver for taking out the inaugural Ensign Yachts ‘Country of Origin’ Estuary Series in the PITTWATER Regatta this weekend. A wonderful weekend was had...

RPAYC member, Tony Morgan’s Bushfire Benefit Concert was a great success and raised over $6000 for the Salvos Bushfire Relief Fund. A big thank you to the guests and to the...

Summer Casual Marina Berth SpecialThe Club has casual marina berths currently available over the Summer period for boats 40' or less, at the special rate of $35 per night!  A great...

Transport for NSW Media Release10 FEBRUARY 2020  Boaters across NSW are being warned to be on high alert for navigation hazards with significant debris and missing navigation markers after the...