The overnight change brought a strong southerly wind early morning, much reduced temperatures and rain. At the scheduled race time there were 2-3 metre high breaking waves, and the fleet was held onshore for 2 hours to wait for the sea state to abate. Bravado from some sailors to go sailing did not influence the race officer, who was prepared to wait it out. So the fleet waited around the club all morning in the hope that racing would take place in the afternoon.

Finally, with the wind still whistling through the rigging, though it was only 18-22 knots on the course area, the fleet was released from the club for a 14.00 start time. However before long they were back. As the race committee boat rounded Barrenjoey Head, it became apparent that racing would not be viable due to the heavy and confused seas and everyone was sent back to the club for an earlier than planned German class dock party. 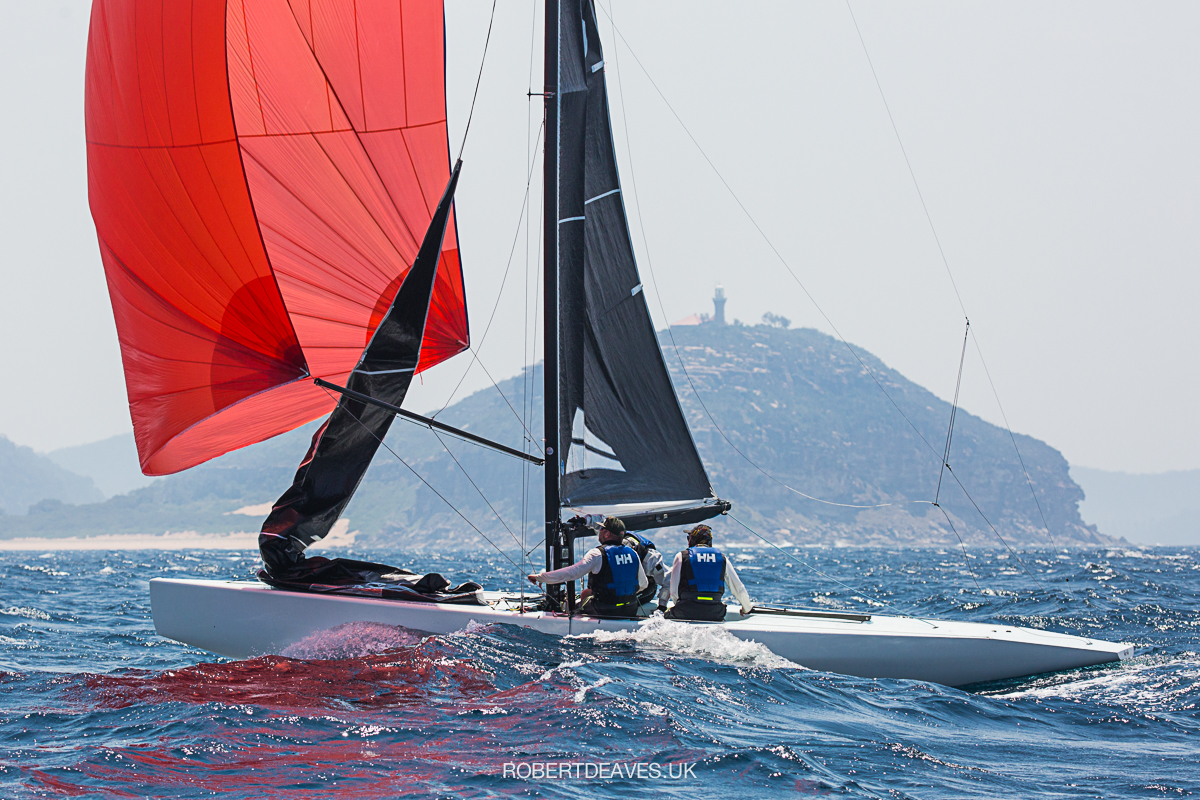 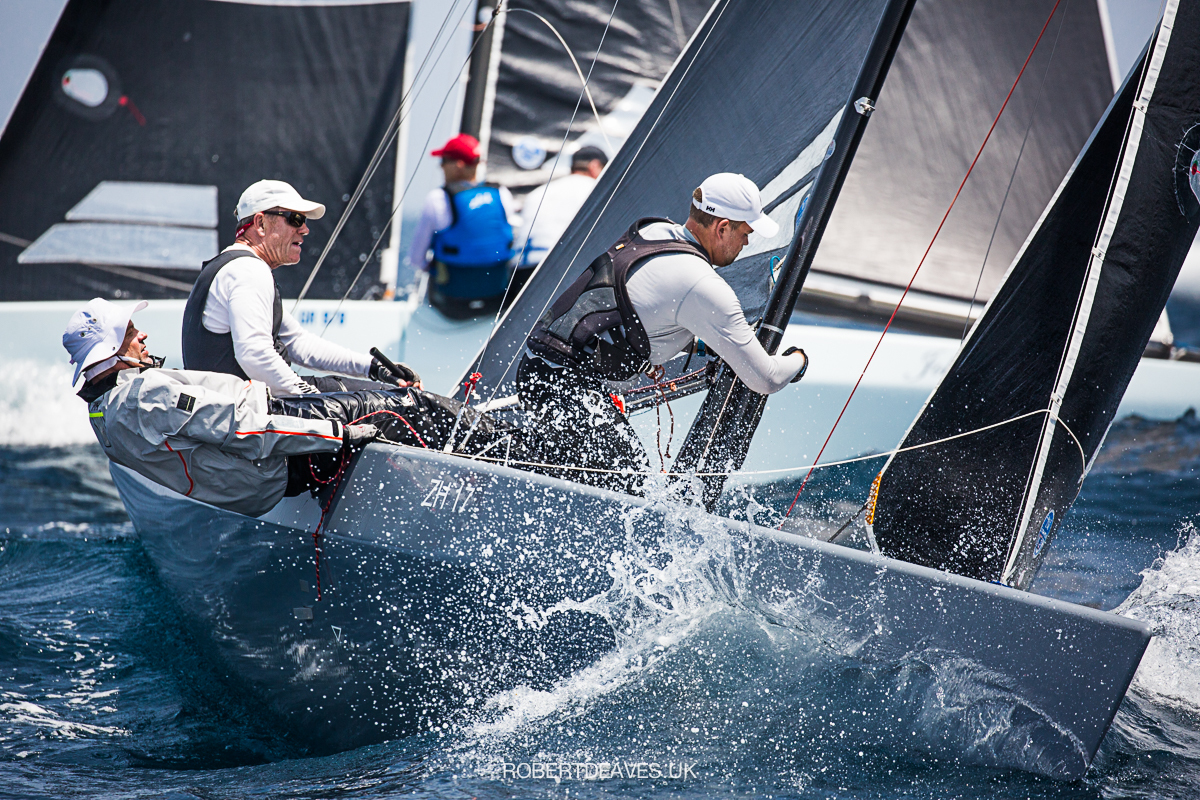 Artemis XIV (NOR 57, Kristian Nergaard, Johan Barne, Anders Pedersen) was again the boat of the day at the 2020 International 5.5 Metre World Championship, in Newport, Australia, to lead the fleet after the second day of racing. Artemis XIV opened the day with a huge race win, before 2018 World Champions, New Moon II (BAH 24, Mark Holowesko, Christoph Burger, Peter Vlasov) took the second race of the day.

With a building north-easterly forecast, the fleet set out on time to clearing skies and rising temperatures. Race 2 started in 8-10 knots and Race two in 10-14 knots with the full northeaster only beginning to fill in on the final upwind to around 16 knots, followed by a great sail downwind into Broken Bay in the increasing breeze. Temperatures also built during the day to around 30 degrees. Pretty much everyone returned to the Royal Prince Alfred Yacht Club, happy and satisfied after a great day of sailing. 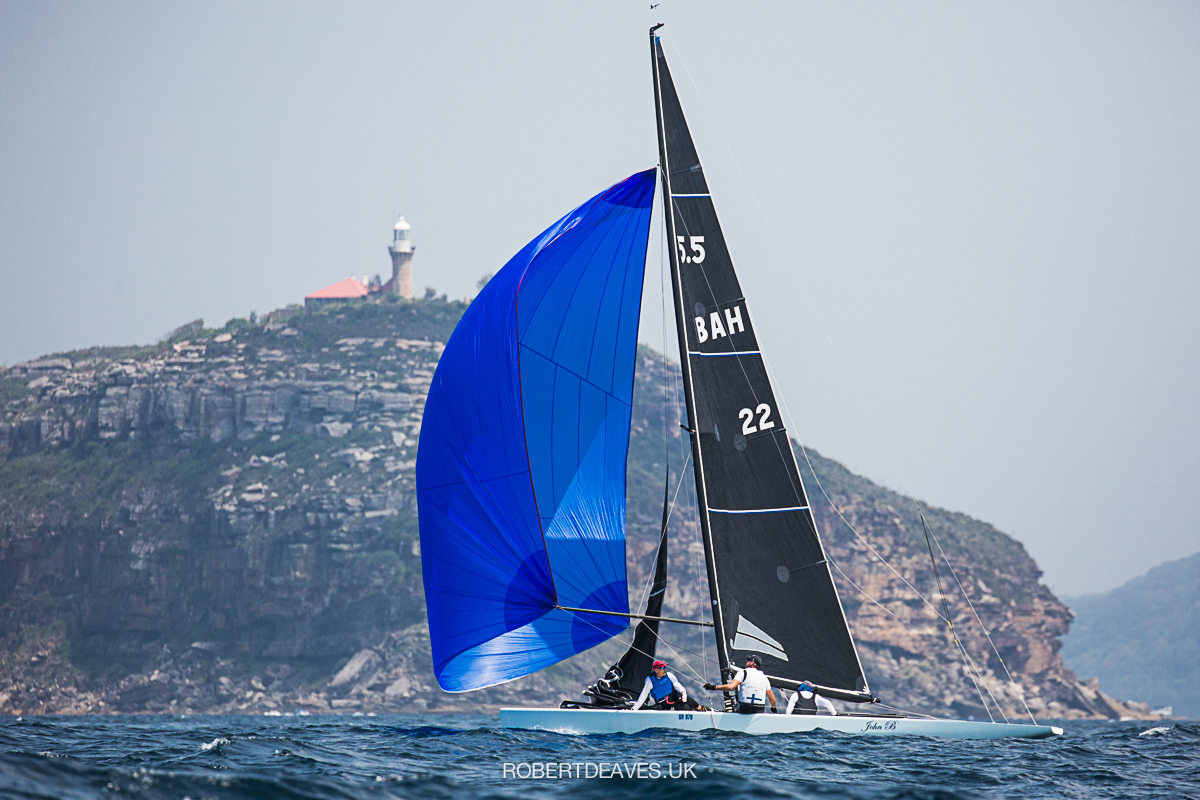 Artemis XIV picked up where they left off on Thursday with an emphatic win in Race 2, leading at every mark and extending away from the fleet. Behind them, there was a battle between three or four boats in the light wind and long legs. Eventually Ali Baba (BAH 23, Craig Symonette, Flavio Marrazi, Will Alloway) emerged in second with Ku-Ring-Gai II (AUS 60, Matt Crawford, Rob Crawford, Matt Visser) sailing a great last beat to finish third in their first event together as a team. With the wind increasing the front-runners changed, with New Moon II finding some pace to round the top mark just a boatlength ahead of Artemis XIV. It remained even down the first run, but with the left increasingly paying in the building breeze they moved head and extended on the second downwind and up again to the finish for a win of nearly a minute. Fellow Bahamians John B (BAH 22, Gavin McKinney, Mathias Dahlman, Lars Horn Johannessen) also sailed a great final upwind to cross second while Artemis XIV was third. Mathias Dalhman, from John B said, “Our day was quite good and a huge improvement from yesterday. We started with a fourth and then got a second. It was good racing. The big change today was that we were on the line at the start and yesterday we weren’t and it much easier when you are sailing with the gang.” “Sailing here in Pittwater is amazing. It was champagne sailing and we are looking forward to the rest of the regatta.” 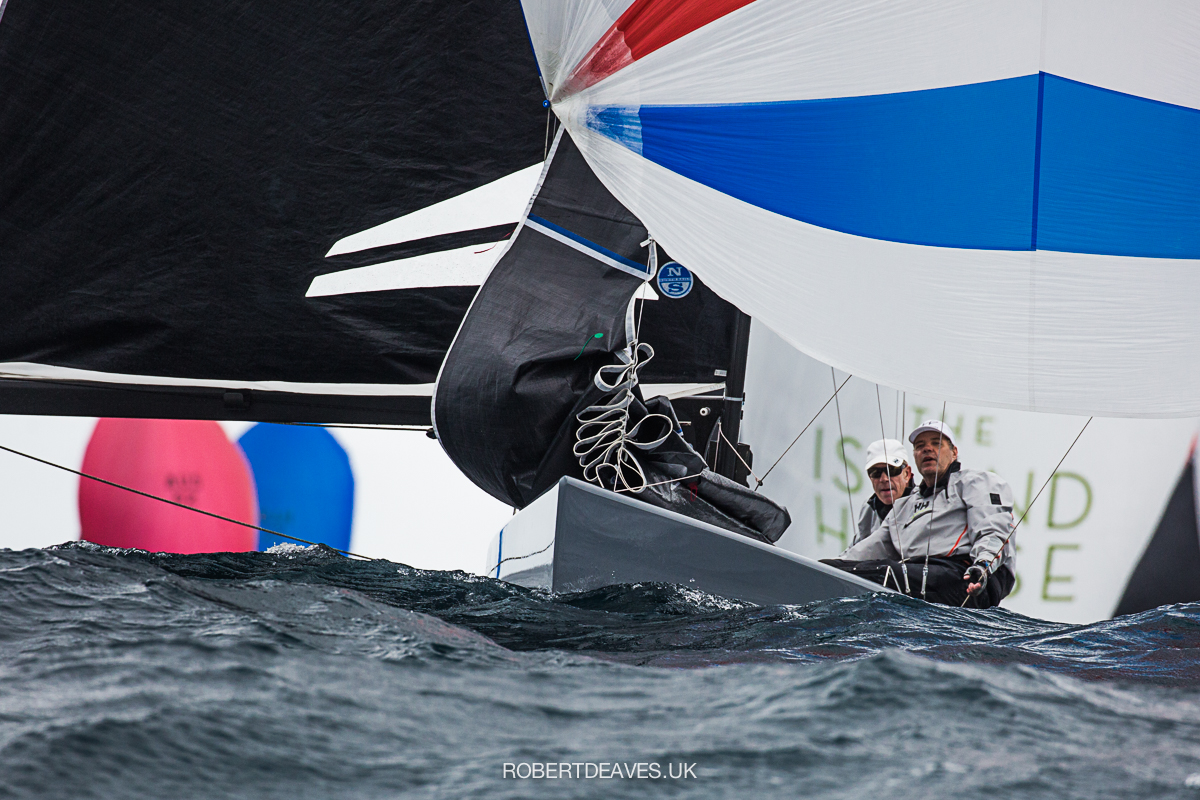 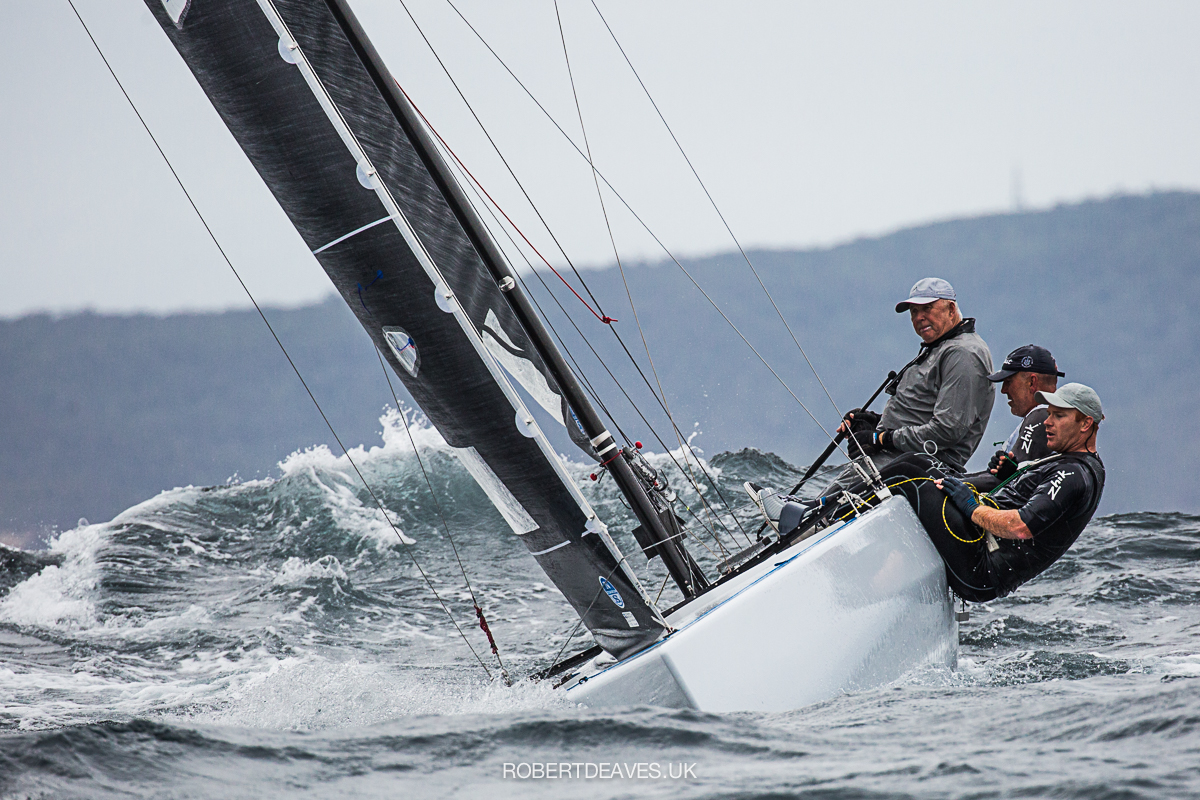 With the wind increasing to 14-18 knots and a big sea state, the first race was a great test for everyone. The right side was favoured with Artemis XIV and Girls on Film early across while New Moon II started at the pin and crossed over later. Artemis XIV rounded the top mark ahead and was never headed, while Girls on Film passed New Moon II on the second top mark. Andrew Palfrey, middleman on Girls on Film, said,  “A really nice day I don’t think it gets much better than that. The sun wasn’t out but it was a fantastic breeze with not many shifts and the sea state was pretty nice upwind and some waves to catch downwind.” “We had a nice start in the middle. We wanted to get over to the right and we eventually got onto port and right did pay a little and we were where we wanted to be at the top mark, just in the game, which was nice and we chipped away from there. Speed and strategy was pretty solid from there and we got back to second in the race, so happy with that.” “We feel like we are competitive and happy to survive the first day.” This is only his third regatta in the 5.5. He sailed with Flavio Marrazi and Christoph Wilke in 2010, and then not again until last year’s Alpen Cup on Lake Garda, with Girls on Film. He continued with a laugh, “We were lucky enough to win both those so I think it’s madness I am here competing, cos I have a pretty good record. I should have sat on it.”

The Royal Prince Alfred Yacht Club and the Smart Boating Group have recentlyformed a strategic partnership designed to offer members of the Club an opportunity to share in the ownership of a syndicate yacht.

Shared boat ownership is becoming increasingly popular and is appealing to people wanting an alternative to full boat ownership due to time constraints and financial barriers. For many people it makes their boating dreams possible.

From the Club’s perspective it will increase membership numbers with all owners of the syndicate yacht berthed at the Club required to be Full Members of RPAYC. With more members comes greater participation around the Club including racing and cruising as well as increased activity in our food and beverage operation and boatyard.

Martin Lyall, Co-Owner / Director of Smart Boating Group said, “I’m thrilled we’ll be able to extend our shared boat offerings to The Alfred’s. The Royal Prince Alfred Yacht Club is a premium location and one in which SMART Boating can grow a substantial yacht fleet. The acceptance of a shared economy means the Club can keep pace with today’s changing world”

Craig Evans, General Manager of the Royal Prince Alfred Yacht Club stated he was, “also excited at the prospect of welcoming new members to the Club, and of equal importance is the fact that from a participation perspective, these syndicate-owned boats will be actively campaigned in RPAYC’s racing programs, specifically the inshore and twilight programs as well as the Club’s cruising calendar.”

The initial yacht to be based at the RPAYC is TWILIGHT, a Jeanneau Sun Odyssey 349 with shares in that syndicate available immediately.

For more information brochures are available from RPAYC reception or online at https://smartboating.com.au/jeanneau-sun-odyssey-349-boatshare/