The final stage of the Dustbuster Series was contested on Sunday morning. 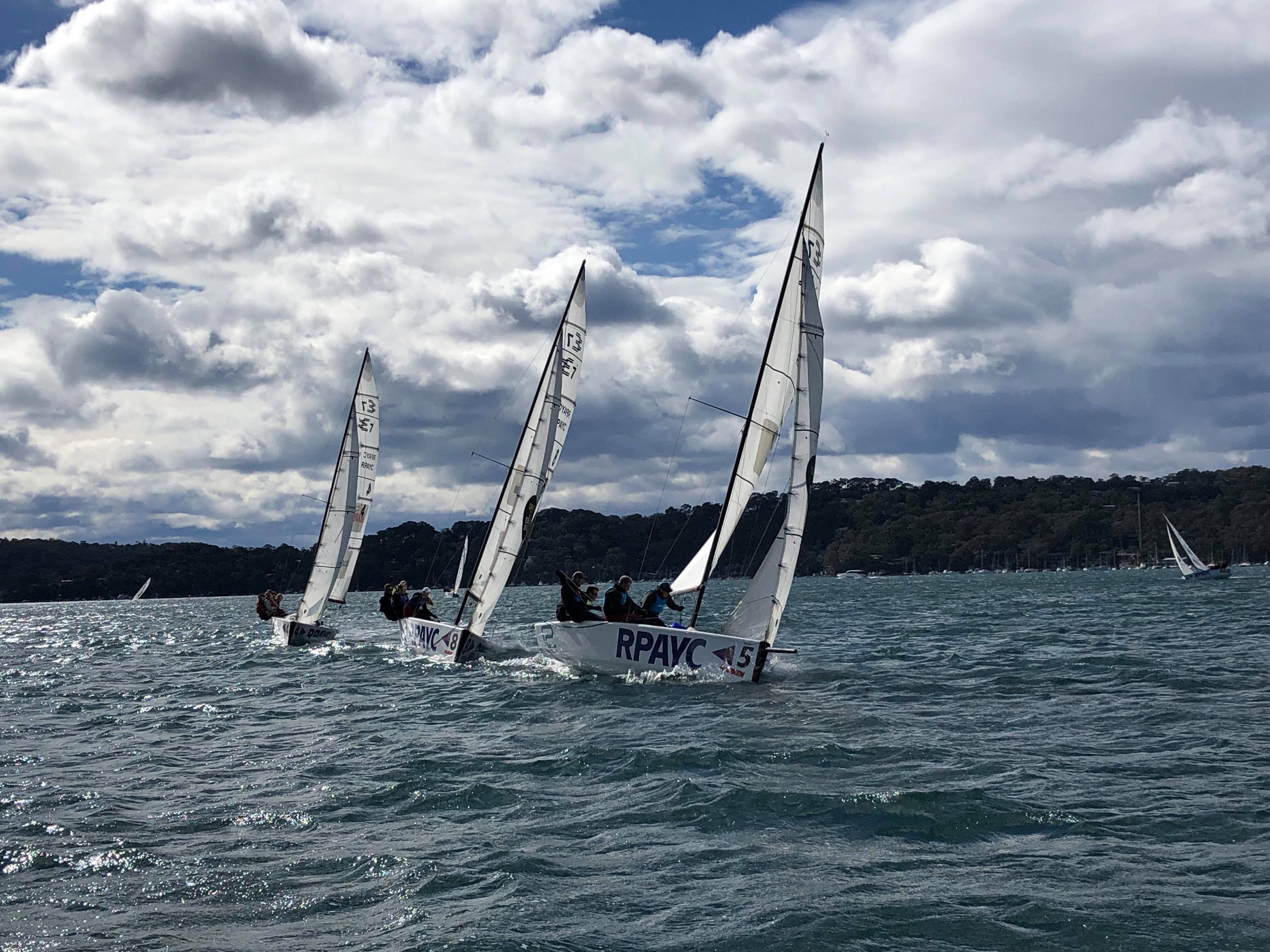 With a 20-30 knot westerly forecast, the Etchells made the bold decision to defer their classes racing to a later date in August (TBC 25/8/19).

The Elliott’s however were chomping at the bit to get out on the water to settle their final placings. A pleasant, but very shifty 10 to 16 knot westerly graced the Elliott competitors for the first 3 races, with the wind strengthening to 25 knots for the fourth and final race.

The first race got underway at 0815hrs under the watchful eye of National Race Officer, Elaine Fowler.

The tussle at the top between regatta leader Pat Langley sailing Riggtech Elliott and Chris Way on Easy Tiger Elliott (with Tom Brewer substituting in) was always going to be exciting to watch, with only a few points separating the two from taking bragging rights.

In the first race, there were plenty of lead changes between the two, with a few teams getting in the way. A few teams decided to call in some heavyweights to fill in for. Alex Robbins on the B&G Elliott called in Jim Colley. Jim has been actively campaigning in the 49er class for the 2020 Tokyo Olympic’s.

John Corrie also decided to bring in some of the Alfreds best youth sailors, with Niall Powers and his team using the Dustbuster as a great warm up before they head off to Noumea next week to compete in a Youth Development Match Racing regatta.

The top two places have been mostly dominated by both Pat and Chris, however both Niall and Jim managed to get in the way!

Whilst Pat struggled a little with his downwind handling, his team more than made up for these errors with their fleet management and strategy. 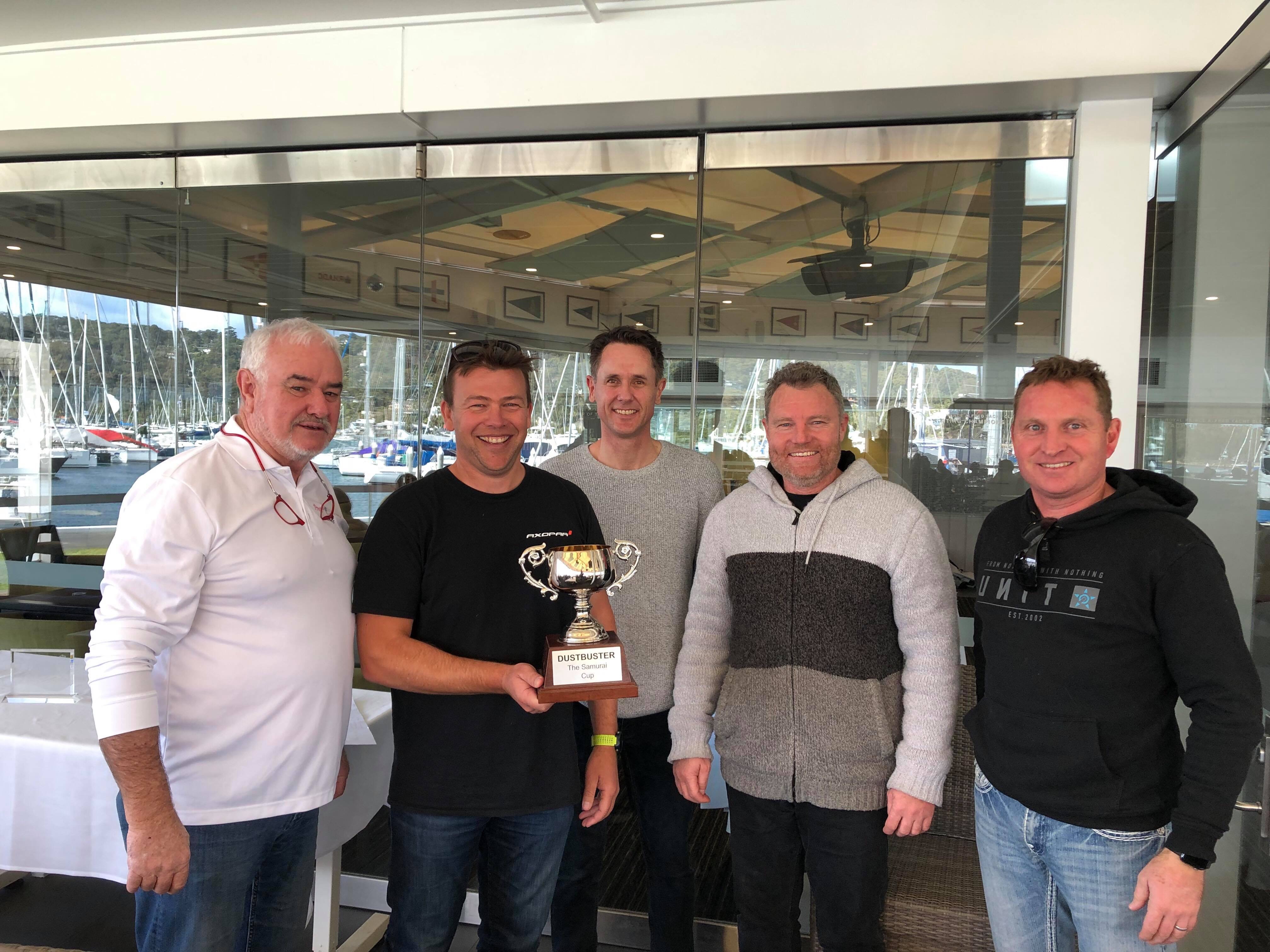 The last race of the day was exciting with 27knots  been recorded at the start.

An eventful first downwind saw the Commodore Michael Lockley lose 2 of his crew members overboard, included Commodore Russell Murphy! Quickly back on board their Lateral Projects Elliott to continue racing.

The boat handling demonstrated by the Alfreds Youth development and Intermediate Youth Development Squad members saw them take a huge victory with both teams finishing 1st and 2nd respectfully.

Pat managed to get 3rd place which was enough to seal the deal and award him the series win.

A large crowd gathered for the prize giving, where Pat and his team were presented with the prestigious Dustbuster “Samurai Cup” perpetual trophy.

On been presented with the trophy and emotiona,l Pat Langley had a few words “We love this style of racing, this has got me and the boys back out on the water and racing, can’t wait for more events like this” . “A big thankyou to my team and the race management team for putting on such a great event, and getting up us all up on these cold and early mornings to run the races”.

The winner of the Series now gains a spot in the David Lukins Memorial Regatta in September.

Round 2 was another great success with 99 sailors hitting the water over the 2 sessions. Running between June & August, this new series comprises of 6 rounds and is open...

The Annual General Meeting will be held at the Club on Tuesday 21 July at 8pm – the Notice of Meeting can be found on the Members Portal.A ballot will...

The Club have made available the option to lease the 6 x LT Windsurfers. The lease is exclusive to members of RPAYC who are wanting to lease a board &...

Dear Members,I hope that this message finds you well.Wednesday 1 July 2020 will mark 100 days since the Federal Government closed Clubs around the country. Over that time, we have...

IYD & YD Squads closing this WEEK! Don't miss out on this great opportunity

The brand new AC9F Youth America’s Cup yacht has undergone an official on-water sail testing day in Auckland with fantastic results, and the event is well on track for 2021.With...

Dear All Selden for Sailing Centreboard Winter Series 2020 Sailors,We trust you are looking forward to this coming weekend’s Round 2 at RPAYC. Registed participants would have recieved an email...

Dear Members,   I hope that this message finds you well.   On the water I had the pleasure of getting out on the water last weekend for the first time in many months. A...

101 sailors hit the water in a fantastic turnout last Sunday for Round 1 of the Selden for Sailing Winter Series. Running between June & August, this new series comprises of 6...